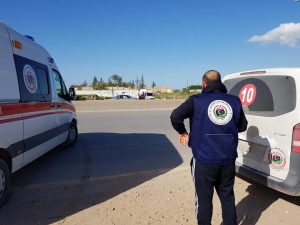 A Tripoli road leading to the conflict zone was closed and an ambulance point was established to treat injuries from the south Tripoli militia fighting yesterday ( PC/MoH).

The Faiez Serraj Presidency Council and Government of National Accord’s Ministry of Health (MoH) has reported 6 dead and 38 injured as a result of the south Tripoli militia fighting that restarted Tuesday and escalated yesterday.

Of the 6 dead, 3 were fighters, 2 civilians and 1 body was categorized as unidentified.

The 38 injured consisted of 36 militiamen, 2 were civilians and the MoH reported 1 person as missing.

The fighting is between the Serraj-aligned Tripoli Protection Force (TPF) and the Tarhuna-based 7th Infantry Kani Brigade.

It will be recalled that four main Tripoli-based militias had amalgamated last December into one main force, and rebranded themselves as the Tripoli Protection Force (TPF).

The fighting ostensibly broke out after the Serraj government took control of the Tripoli International Airport site in order to secure it and hand it over to the Italian consortium to commence its construction work.

Both sides blamed the other for restarting the fighting.

The Serraj Ministry of Health yesterday put its health sector on alert and a field hospital was erected and ambulances were stationed on the edges of the conflict zone.

Schools were closed in the fighting area of Gaser Benghashir with some civilians abandoning their homes to stay with relatives in Tripoli and elsewhere.

Sound of gunfire and explosions could be heard in some parts of Tripoli.

The Serraj Ministry of Interior (MoI) issued a statement in which it warned of the humanitarian situation.

It said civilians were terrorized “due to clashes between uncontrolled armed groups”.

It warned of any attempt to impose a policy of fait accompli on the perimeter of Tripoli airport and considers it unacceptable because “the airport is a vital and sovereign annex that can not be subordinated or submitted to any regional or militia force whatsoever.”

It warned that it will take necessary measures to secure the airport.

The Serraj MoI statement follows on from a statement by UNSMIL yesterday in which it warned against the resumption of fighting. It warned those responsible will be held accountable.