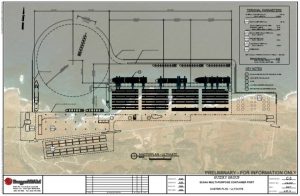 U.S. investment firm, The Guidry Group, announced today that Libya’s authorities in the East and West have come together and formally agreed to jointly support what will become one of North Africa’s most highly-automated and largest deep-sea ports near the city of Susah in Libya.

Specifically, the United Nations-backed and Faiez Serraj-led Presidency Council and Government of National Accord (PC/GNA) based in the capital Tripoli, and the House of Representatives’s Interim Government based in the eastern city of Beida, will cooperate on the billion-dollar ‘Port of Susah’ project.

“A historical moment, the development of the Port of Susah has secured the support of both the East and West – the culmination of months of discussions between the once fractured Libyan governments that are now focused on one common objective,” said Michael Guidry, founder and CEO of U.S.-based The Guidry Group.

“The pivotal goal of the Port of Susah is not only to spark an economic resurgence and additional investments from the international community, but to chart a new course for Libya and its people.”, he added.

It revealed that the unified support is the result of three years of hard work, as well as months of discussions between the Seaport Authority officials in the East and West.

The Group said that the now united representatives of the Libyan people have made it their highest priority to deliver economic opportunity for their people by redeveloping, restoring and modernizing Libya’s critical infrastructure, starting with ports and maritime capabilities through the development of the Port of Susah.

“The Seaport Authorities in the East and West are working closely together on everything related to the ports and maritime capabilities and The Guidry Group is a valued partner that believes in the potential of Libya,” said Captain Hassan Jwaili, Seaport Chairman of the East.

“In addition to the multi-purpose port and logistics center, projected to generate tens of millions of dollars in its first year alone, we have asked The Guidry Group team to join new investors in other opportunities available across our nation.”, Jwaili added.

The Seaport Authority, the governing authority that manages all the ports in the East and the West, will coordinate development to ensure and guarantee the effective planning and delivery of the Port of Susah.

“The Port of Susah will help to grow our economy and create much needed employment opportunities for our nation’s people who are hungry for change,” said Dr. Nasereldeen Mehna, a member of the House of Representatives. “In the near future we will see one united government but, in the meantime, we have to open our country for investment in essential infrastructure projects and guarantee the transfer of knowledge and know-how in Libya.”, Mehna said.

When completed, the Guidry Group said, the Port of Susah, a major international trans-shipment hub container port, will be a crossroads in North Africa for mainline cargo vessels traveling to and from Asia and Europe via the Suez Canal, as well as to and from the United States.

It said that the Port of Susah will breathe vital economic life into the region, help improve the human condition, and position Libya as a major economic center for trade and commerce once it becomes fully operational upon completion in 2022.

It revealed that this is the first-ever design-build-operate-transfer, or D.B.O.T., public- and private-partnership (PPP) infrastructure project in Libya, aimed at paving the way for Libya’s economic growth and leading role in regional trade. At the end of the long-term concession, the entire project is transferred to Libya’s government as part of the country’s resurgence.

In 2022 it projects that the Port of Susah is expected to generate approximately $60 million in revenues, which are anticipated to double by the year 2040. This excludes additional revenues from handling general and bulk cargo, as well as those generated from the integrated logistics and freight facilities.

Revenue estimates are based on the port being able to handle around 500,000 TEUs {Twenty Equivalent Units] in the first year of operations – Phase 1 of the project – and increasing an anticipated three-times in Phase 2 and 3.

The Guidry Group says that the Port of Susah project will create significant job opportunities for hundreds of Libyan nationals in a highly efficient, productive and technologically advanced cargo-handling facilities. There will be a significant investment in training facilities that includes simulators and virtual classrooms to ensure that a major source of personnel for the project is local.

It will be recalled that the Guidry Group was selected from among a competitive field of nine international firms in 2015 to develop the multi-purpose port following a multi-year world-wide solicitation of proposals by Libya.

Founded in 1985, the international investment firm has become increasingly focused on the development of critical infrastructure, including large-scale projects to help revive war-torn countries by assisting them with rebuilding their economies and communities.

The firm is also a global leader in a range of personal and data security services, business pathfinding, specialty insurance, and crisis response and management, with experience in 148 countries. To learn more, please visit www.guidry.com.