PC meets foreign media and vows to facilitate their work 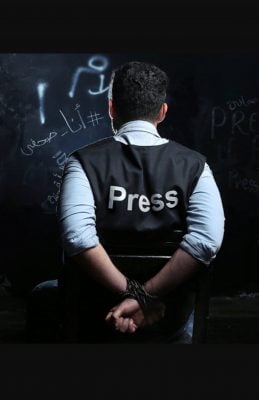 The Serraj government has vowed its support for the freedom of foreign meda representatves operating n Libya (Photo: Social Media).

The Faiez Serraj Presidency Council and Government of National Accord (PC/GNA) met today with accredited foreign media representative in Tripoli and vowed to facilitate their work in Libya.

A number of issues impeding foreign media operations in western Libya as well as ways to mitigate them were discussed.

The Serraj PC/GNA vowed to facilitate the work of foreign media in achieving accuracy and establishing the facts in reporting stories.

The Interior Ministry Media Head stated that his Minister of Interior Fathi Bashagha has issued instructions to all its Ministry to ease and facilitate the work of foreign media in western Libya.

He called for cooperation between the media departments of all the Serraj Ministries and foreign media representatives to better establish facts and accuracy in reporting – away from ambiguity and misinformation.

While these PC/GNA statements supportive of the media are welcomed, it is unclear how effective they will be out in the field.

For example, it is not at all clear, on the one hand, how far this message trickles down and resonates with the rank and file members of the regular Serraj-controlled police and army.

On the other hand, Serraj’s control-and-command of the various militias aligned to him and that prop-up his administration are even more difficult to influence when it’s comes to dealing with the media.

It must also be recalled that after over four decades of dictatorial rule under Qaddafi, there is also a lack of a culture in Libya of dealing with and accepting the role of independent, investigative and critical media.

Independent media is often feared and conveniently demonized in Libya and portrayed as the fundamental cause of Libya’s disunity and political polarization.

This phobia and demonization of the media, for example, extends to the Serraj administration which has regularly failed to respond to basic fact-checking enquiries by this newspaper.

This meeting by the Serraj-led PC/GNA with the media comes on the back of a similar statement supporting the media by Serraj’s personal spokesperson Mohamed El-Sallak in January 2019.

El-Sallak had said that Serraj was “fully respectful of journalists and media professionals, and affirms their right to cover the various events and access to information”

Sallak had added that Serraj considered “any action that has occurred contrary to this approach, is an individual act of censure of the press, and in no way reflects the policy of his government towards the press and the media.”

Sallak stressed that the Serraj government had taken “the necessary measures to prevent the reoccurance” of any media harassment or suppression.

Serraj’s Interior Minister, Fathi Bashagha, had also met with El-Sallak in January at the Interior’s Tripoli headquarters where they discussed the “importance of overcoming the difficulties and obstacles that prevent media professionals from performing their duties and work”.

Bashagha had stressed his keenness to respect the rights and safety of media professionals and journalists and to hold accountable all those who violate the law.

For his part, Sallak conveyed the affirmation of Sarraj’s  “full respect for the media and journalists and his appreciation for the importance of the work and the right to cover events and access to information.”

These January 2019 meetings and pronouncements had in turn come in reaction to three events in 2018.

The international press freedom NGO, Reporters Without Borders (RSF) and the Libyan Centre for Freedom of Press (LCFP) had in August 2018 urged Sarraj to ‘‘intervene immediately to rescind all measures obstructing the work of international journalists and the Libyan correspondents of foreign media outlets’’.

In an open letter addressed to Serraj, the two NGOs had said that ‘‘in a communiqué dated 3 August 2018, the Libyan foreign ministry’s Foreign Media Department (FMD) unveiled an unprecedented series of new measures that create further obstacles to the work of international journalists and the Libyan correspondents of foreign media outlets.

The existing interminable delays in obtaining and renewing visas, countless other forms of red tape and various kinds of harassment have now been compounded by 13 new measures to which international journalists and the Libyan correspondents of foreign media outlets must submit when applying to the Ministry of Labour and Rehabilitation for accreditation to work in Libya.

Each of these 13 measures details of an additional bureaucratic step that must be undertaken with an administrative entity, and constitutes another real barrier to journalistic freedom’’.

The letter continued that ‘‘on the pretext of offering them better security guarantees, the FMD is tightening its grip on the foreign media at a time when, in the run-up to the general elections scheduled for 10 December, the freedom to inform is proving more essential than ever for a democratic and pluralistic debate in Libya’’.

The letter also pointed out that ‘‘all existing accreditations have been cancelled since the end of 2017 on the grounds that new procedures are being put in place. Since then, the FMD has replaced the old procedures by mechanisms designed to prevent journalists from working freely and independently. It now issues only temporary permits and in a sporadic manner. Many journalists have been left without accreditation, which exposes them to them to the risk of being expelled or being attacked’’.

RSF and LCFP had expressed ‘‘their utmost concern about the constantly escalating restrictions that are making journalistic work almost impossible. The FMD limits journalists to covering events in which it is a participant and obstructs the work of those who do not comply with its demands, using accreditation as blackmail to force international news agencies to stop employing some of their correspondents. All journalists agree that working in Tripoli now constitutes an almost insurmountable challenge that threatens both their physical and their judicial security.

We also think it is crucial to point out that the obligation for journalists to wear a vest with the word “Press” and the FMD logo constitutes a violation of media independence and endangers their lives in a country in which all media personnel are potential targets.

All of these unwarranted obligations restrict the freedom to inform and help to delay realization of the democratic aspirations that the Libyan people expressed in 2011’’.

To this end, RSF and LCFP had called on the Tripoli-based Libyan government to:

It will be recalled that on 31 July four Libya-based Reuters and AFP journalists/photographers were held for over ten hours by a Presidency Council / Government of National Accord-aligned militia whilst covering a story on illegal migration at Tripoli’s Bu Sitta Naval base.

The journalists/photographers had been invited by the Serraj-led Presidency Council / Government of National Accord to cover the event.

Although they were released at the end of the day, it was noted that neither the Serraj Presidency Council / Government of National Accord nor the Foreign Media Department (FMD) of the Foreign Ministry made any public condemnation of the incident.

The incident raised fears amongst Libya-based media on how they would be able to cover any forthcoming Libyan referendum or elections in such circumstances.

The FMD had also launched a quarterly prize for the “best performing” media/journalists operating in Libya.

There are fears that this is a process by which the Tripoli-based government is attempting to restrict or control the media operating within Tripoli.