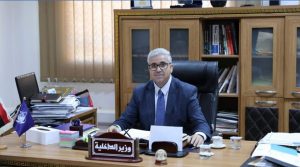 Libya’s Presidency Council and Government of National Accord (PC/GNA) Interior Minister-designate, Fathi Bashagha, said in an interview with Al-Hurra television Thursday that Hafter played a “national role” in his recent military action in the south of Libya.

On Libya’s militias he said that his government had reached “the end of the road” with them.

He also said that the U.S. was currently showing “increased interest” in supporting Libya’s political consensus.

On Libya’s recalcitrant militias, Bashagha said that the understanding between Libyan security institutions (militias) had “reached a dead end”.

He stressed that “Libyans were fed up with the militias and their excesses … (and) these scenes (of militias) in the capital Tripoli”.

Bashagha said that his ministry had received the full support of Prime Minister Faiez Sarraj, “but there are other security institutions (militias) that hinder the efforts of the Ministry of the Interior.

But we have reached a dead end, and that is why we have resorted to the owners of the Libyan Political Agreement (signed in Skhirat in 2015), namely the House of Representatives and the High State Council to find solutions to these security institutions. “

Bashagha, who is currently visiting the United States at the invitation of the US government, stressed that Libya’s political instability leads to security instability, “which is costly to neighbouring and Mediterranean countries.”

On the move by Hafter’s Libyan National Army (LNA) south and the dispute over control of the Sharara oilfield, Bashagha said that “the PC/GNA is concerned by any forces outside its control that expands or moves from place to place in Libya without consultation.”

Bashagha was referring to Hafter’s LNA launching an offensive in the south last month to fight hardline Islamists, Chadian opposition forces and smugglers across the border as well as to secure the Sharara oilfield that has been shutdown by the Natonal Oil Corporation (NOC) since December.

The shutdown and declaration of force majeure by the NOC was as a result of Sharara being occupied by locals protesting what they say are genuine grievances. The NOC’s chairman Mustafa Sanalla insists they are armed groups holding the NOC and nation to armed ransome.

Bagsagha said that what happened in the south (Hafter’s military action) was “acceptable from the national point of view” and that after Hafter’s action the south was now free of organized crime – crime which had been exacerbated by political divisions of Libya.

Bashagha gave the most supportive comment on Hafter to come out of a PC/GNA minister in recent years. But he qualified it politically.

“We hope that Hafar’s forces will only play their national role, not invest them politically in order to increase the division or achieve a gain because if this trend goes, I think there will be other repercussions,” he said.

Bashagha welcomed and then gave his own reading of the recent U.S. statement on Hafter and the military activity in the south.

The US statement expressed concern about the ongoing tensions in the southern Libyan region, called on all parties to establish mutually acceptable security arrangements and ensure the integrity of the National Oil Corporation and allow it to resume its work.

Bashagha said that “this statement may make the other party (Hafter) resort to reason.”

He added: “If Libya continues in this division, the division is not in favour of either the East or the West nor the South.

And, as I am the primary person responsible for security, security is indivisible. If there is security in Tripoli and if there is no security in the south or the eastern region certainly Tripoli will remain threatened “.

Looking forward he added “We hope politicians, dissidents or those who want to impose their opinion with the use of arms, or by the force of law, or by legislation, or by any other means – we hope they make concessions for Libya because the situation is not in their favour and not in the interest of anyone.”

On foreign intervention in Libyan affairs, Bashagha described these attempts as “negative”, noting that these interventions deepen Libya’s problems rather than solve them.

In response to a direct question about the Italian-French conflict in Libya, he said that “not only France and Italy, many countries intervene. We consider this intervention as a negative intervention and not positive because positive interventions should promote reconciliation between Libyans and bring the views closer.”

However, Bashagha saw an alternative solution to this conundrum.

“I think the security, economic and investment partnership with the US would protect Libya from the evil of these (foreign) interventions and this is what we are working on now.”

He concluded that “the United States is clear. Its interest is in the security file in terms of combating terrorism and the stability of Libya and supporting the Government of  National Accord and the search for reconciliation and the unification of Libya and the protection of the Libyan Investment Authority and the Central Bank of Libya and the National Oil Corporation”.