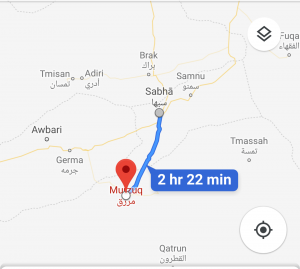 There are conflicting reports about the fighting in Murzuk by Khalifa Hafter-led LNA forces and Tebu forces (Google Maps).

There have been conflicting reports on the battle in Murzuk between the Khalifa Hafter-led Libyan National Army (LNA) and its local allies, and opposition Tebu forces.

Murzuk is located 144 km south of the southern regional capital Sebha. The battle there is a continuation of Khalifa Hafter’s military operation from Sebha and in the southern region to “clean” the area of criminals and foreign mercenaries.

Yesterday, the LNA’s Official Spokesperson Ahmed Mesmari, reported on behalf of the Karama (Dignity) Operation Room: “Our forces have secured the city of Murzuk”.

However, today there have been reports that the Tebu coalition, which the LNA claim include Chadian mercenaries, have mounted a counter attack and pushed the LNA coalition forces out.

There are unconfirmed reports that the LNA has suffered some deaths and loss of military vehicles.

Fighting is still ongoing and the situation is still fluid.