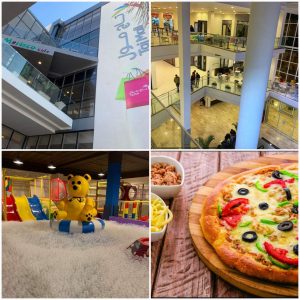 The owners say the mall has over 45 mixed outlets, a variety of cafes and restaurants, a floor dedicated to children and dedicated parking.

The mall will be a welcomed addition to Libya’s retail sector which is still lagging behind those of its peers.

Most of the country’s retail sector is still based on individual single-owned establishments rather than multi-outlet chains.

There are a handful of other small and medium-sized malls across the country, but there are no international class malls on the par of those in Dubai, for example.

In January 2017 Tarhuna opened one of Libya’s largest malls with more than 300 shops.

It will be recalled that the Qaddafi regime decimated the retail sector in the 1980’s by nationalizing the whole sector. The state opened a number of shopping centres on the line of eastern Europe.

They were a total failure as the command economy collapsed into poor quality and shortages creating a vibrant black market for quality imported goods.

During the Saif al-Islam Qaddafi reform years leading up to 2009 (the 40th anniversary of Qaddafi’s revolution) a number of shopping malls began to be constructed, but the 2011 revolution interupted their completion.