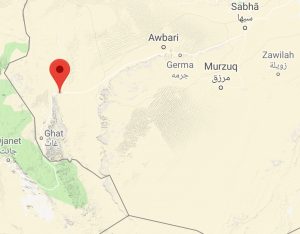 The LNA spokesperson, Ahmed Al-Mesmari, said on Thursday that the LNA had taken the south western towns of Awainat and Ghat without any fighting. The LNA Military Information Division had posted photographs of the claimed peaceful entry.

Al-Alawinat is located 240 km south west of the city of Ubari and 120 km north of the city of Ghat. Its residents are ethnically from the Toureg tribe which may have made it easier for the LNA to enter this area.

On Friday Mesmari had announced that the LNA had gained control of the Umm Al Aranib area in the south of the country. Again, the LNA’s Military Information Division had claimed their troops were welcomed into the areas. 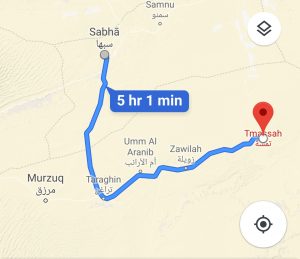 With the LNA reaching Ghat, the LNA, directly or indirectly, through its numerous local alliances, now ostensibly controls most of Libya’s southern borders with Sudan, Niger, Chad and Algeria.

It is not clear how much presence the LNA actually has in the areas it now claims to “control”. It has had to work with its local allies in the south to help it achieve its relatively peaceful “victories”.

Indeed with the exception of Murzuk, the LNA has enjoyed a procession, having arranged a peaceful entry to most new territorial gains.

It is one thing to enter an area and force your opponent’s forces out, and it’s another thing to keep possession over time. The more territory the LNA occupies, the more stretched its resources become and logistic challenges it will face.

No doubt these claimed military gains by Hafter and his LNA coalition have strengthened his political hand, including during the recent UNSMIL-brokered Abu Dhabi meeting with Faiez Serraj.

It is not clear what Hafter’s next move will be. His LNA have made no secret of their desire to “liberate” Tripoli peacefully.

It is to be seen if Hafter now turns his attentions north to Tripoli and whether the main forces in Tripoli, Misrata, Zintan, Gharian,  Zawia etc will accept his peaceful entry.

It will be recalled that Tripoli’s main militia coalition, the Tripoli Protection Force (TPF), have made declarations in total opposition to Hafter. In their 14 February declaration, they labled Hafter a “war criminal”.

Equally, the so-called Islamist coalition of militias based in the western region have also declared their total opposition to Hafter. This came in their 16 February meeting at the Rixos hotel complex in Tripoli.

These declarations, if acted upon, do not auger for a peaceful entry hy Hafter’s forces into Tripoli.

LNA claims to have pushed further south to Traghen