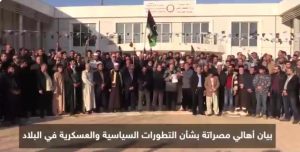 After receiving support from leading political parties, there has been pushback on a number of fronts in Libya over the weekend against the Abu Dhabi Serraj-Hafter “agreement”.

Misrata Military Council and its Council of Elders called yestetday for all those supporting the establishment of a modern civilian state of law and institutions and of peaceful transfer of power to resist any attempts by the criminal Khalifa Hafter to carry out a coup to takeover power and return Libya to military rule.

The statement condemned UNSMIL for the way it deals with Hafter and for ignoring the political desires of the Libyan people.

This contrasts with the (Islamist) Justice and Construction Party and the National Forces Alliance supporting the deal.

It seems that those opposing the Abu Dhabi agreement are concerned about the bland statement made by UNSMIL which does not come out front and centre for a civilian state and against military rule.

There is concern that the statements said nothing about Hafter’s military progress on the ground and a fear that a secret deal to accommodate Hafter has been struck in Abu Dhabi.