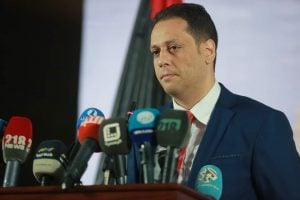 Faiez Serraj, head of Libya’s Presidential Council and Government of National Accord, revealed that he held his Abu Dhabi meeting with Khalifa Hafter, Commander of the Libyan National Army (LNA), as part of a wide consultation proccess with all parties on the Libyan political arena.

The revelation was made yesterday through his official personal spokesperson, Mohamed El-Sallak, during the weekly press conference held at the Media Department of the Prime Minister’s office in Tripoli.

Serraj was responding to some criticism on his Hafter meeting and the agreement that came out of it.

There is still a section of Libya that totally rejects and distrusts Hafter, and sees any meeting with him as a form of support and reaffirmation of his central status in Libyan politics.

These critics see Hafter as a slippery hypocrite who is on the one hand paying lip service to elections and democracy while his forces creep slowly but surely from southern Libya towards his ultimate target: Tripoli.

Respondng to this, Serraj said that he had met Hafter in order to prevent the spilling of blood and to reach a formula to avoid the country falling into conflict and military escalation.

Serraj stressed that the Abu Dhabi Hafter agreement offers the possibility of building further upon it. He did not expand on that.

He confirmed that the Hafter agreement included the curtailment of the transitional stage Libya is stuck in since 2011, the unification of state institutions, and the completion of parliamentary and presidential elections before the end of this year.

In addition, it was agreed for the need to provide the appropriate environment for conducting elections and to support the efforts of the UN envoy Ghassan Salame this regard.

Serraj also insisted on a number of constants, foremost among which is a civilian Libyan state, a non-military solution to the Libyan crisis, the peaceful circulation/transfer of power, and preventing any attempts to create sedition that would bring Libyan cities into civil war.

Serraj stressed that there is no alternative to dialogue, negotiation, reconciliation and bridging the rift between all Libyans of all walks of life for the sake of peace and stability.

He noted that the alternative would only be a destructive war that would affect all equally with no winner and with the whole country, its people and its capabilities being the losers stressing that Libya is big enough for all its citizens and will be built with the hands of its sons and not their sponsors.

Serraj added that in parallel to the political effort, work has been done to alleviate the suffering of citizens through two simultaneous programmes of economic and security reform, explaining the emergence of some positive results of the economic reforms, represented by a reduction of the deficit, and a gradual decline in the hard currency black market exchange rate, stressing that this is a first phase that will be followed by other agreed phases.

With regard to the so-called Security Arrangements, Serraj said that the Ministry of the Interior, its agencies and all Regional Military Zones were endeavouring to complete the security arrangements successfully and to overcome any obstacles or difficulties encountered in completing them and their success in the establishment of security.

The Security Arrangements, it will be recalled, are the security policies enshrined in the 2015 Skhirate Libyan Political Agreement (LPA) which prescribed that upon entering Libya, the Presidency Council and Government of National Accord were to implement a policy whereby militias are replaced by a regular army and police and the militias’s weapons were to be removed out of all urban centres.

On the Sharara oilfield, Serraj confirmed the fruitful cooperation with the National Oil Corporation (NOC) to find possible solutions in this regard, noting that it was agreed to establish security arrangements under the supervision of the NOC and to remove all (armed Libyan) civilians from the oilfield, where force majeure had been lifted two days earlier.