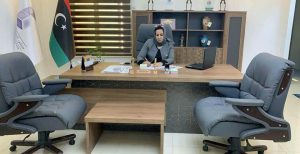 The agreement was signed for the LBC and Libya by Ms. Fawzia Al-Furjani, Chair of the LBC Benghazi branch. The agreement with the exhibition management at the Dubai Trade Centre of the Ministry of Economy and Foreign Trade, provides the State of Libya with an official wing at the event which will represent the participation of 30 Libyan companies from various fields.

This year’s event, which will be the ninth meeting, will be held under the banner “Planning for Future of Investment’’ and will hosts more than 140 countries from all over the world.

“The Libyan presence is great in Dubai and is a testament to the depth of relations between the two countries at all levels,” al-Furjani said.

“The participation of more than 30 Libyan companies symbolizes that Libya has taken to the stage of reconstruction and economic recovery together with the UAE after the devastation caused by the war,” Furjani said.

Furjani called on businessmen, economists and investors in the two countries to invest jointly, which would be a first for the two brotherly peoples and to find real investment opportunities on the Libyan and Emirati arena to strengthen the bonds of love and increase the volume of cooperation between the UAE and Libya in various fields.

Al-Furjani concluded that there is a continuous increase in the volume of trade between the Emirates and Libya, but that there must be a direct sea line between the ports of Libya and the UAE.