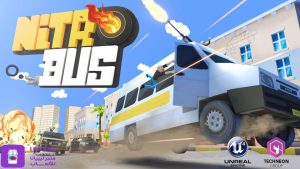 The game which has been out on a beta test version since last year has been long in the release. In October 2017, when Libya Herald interviewed Sadek, Techneon had hoped to release the game by the end of 2017. However, development of the Alpha version took longer.

The Tripoli-based company believes it is the first official Libyan company to launch a mobile game.

Nitro Bus is based on Libya’s iconic IVECO brand minibuses seen taxiing people all around the country with their recognizable yellow markings. With such an iconic symbol, Techneon wanted the game to be worthy of being the first Libyan mobile phone game.

Techneon are very optimistic about the future of the IT, gaming and coding industry in Libya, with the existence of a pool of talented Libyan youth that can invest their talents in the related field. A potential that can develop an industry-cluster that can provide good jobs and a good income to the local economy.