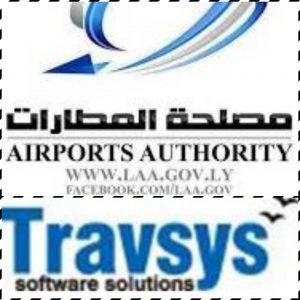 The LAA has given Libya’s two main airliners a week to conclude their contract with Dutch firm Travsys (Photo: collage y LH of logos).

Libya’s Airports Authority (LAA) has granted Libya’s two main state carriers, Libyan Airlines and Afriqiyah, one week to conclude a contract with Dutch company Travsys Software Solutions or it will cancel the contract.

The ultimatum came during a meeting between the LAA, the Libyan state airliners and a number of other related entities on Sunday at the LAA’s Tripoli headquarters to review the contract.

However, without the LAA giving any more details, it seems that this ‘‘contract’’ between Travsys and the airliners is incomplete. In its statement the LAA acknowledged that the contract ‘‘is in the process’’ of providing the rest of the airports with the services ‘‘once a final agreement is reached’’ between the project’s implementing company and air carriers.

However, the LAA said that this final agreement must have what it referred to as ‘‘a contractual formula that guarantees the rights of both parties and contributes to better services for air carriers and passengers, without affecting the contract that has already been concluded by the LAA and approved by the concerned authorities in the (Libyan) state’’.

At the end of the meeting the LAA gave the carriers until next week to reach ‘‘a final draft agreement’’ otherwise it said that it will take the necessary measures to ‘‘completely cancel the project’’.

It will be recalled, and as reported at the time by Libya Herald, the LAA had announced in November 2016 that it had signed a contract with Travsys to provide services to all of Libya’s airports.

It had said that Travsys would initially supply seven airports in the first six months: Mitiga, Labraq, Misrata, Tobruk, Ghat, Taminhint and Zuara. It had added that the rest of Libya’s airports would be completed ”within the next six months, subject to security conditions”.

Libya Herald had contacted Travsys for further information about the contract, but the company had not responded by time of publication.