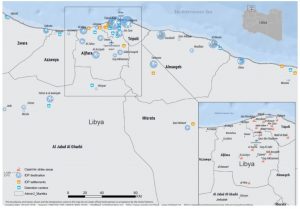 The map by the UN Office for the Coordination of Humanitarian Affairs (OCHA) gives an updated independent indicator of where fighting and air strikes have occurred in the Tripoli fighting (Photo: OCHA).

Indiscriminate shelling/rocket attacks on residential areas have continued during the Tripoli fighting in violation of international humanitarian law, the latest UN’s Libya Office for the Coordination of Humanitarian Affairs (OCHA) has said. The report comes as aerial attacks continued overnight on suburbs of the capital believed to be launched by the Khalifa Hafter-led Libyan National Army (LNA) and aligned forces.

It reported that over the night of 25-26 April, Grad and mortar shells were reportedly fired on residential areas in Al Hadba, in Abu Sleem and Al Sidra municipalities, with unconfirmed reports of casualties and material damage reported. OCHA said that it had received a report from the Mayor of Abu Sleem that one civilian sustained injuries in the shelling and that there might be unexploded ordnance in populated areas in Abu Sleem resulting from the attack.

On the night of 27-28 April, the OCHA reports said airstrikes were also reported to have impacted in residential areas, including in Ain Zara and Al Twaisha area of Tripoli, with unconfirmed reports of at least one civilian death, as well as damage to civilian buildings and homes.

It said that airstrikes impacting a military base located in the vicinity of the Al-Fallah 1 and 2 Internally Displaced Persons’ camps were also reported, with no civilian casualties reported. Elsewhere, armed clashes, shelling and airstrikes continued along established frontlines. Verified civilian casualty figures remain unchanged as of this reporting, with no new civilian casualties verified since 25 April, the report added.

The says that there have now been 41,000 internally displaced, fleeing the fighting, and that 29,700 people have now received some kind of assistance from international agencies. The report confirmed that since the beginning of the conflict at least 90 civilian casualties, including 21 fatalities have been verified. These casualties include medical personnel, women and children, and at least one foreign national.

Additionally, the report says that a significant population of urban migrants and refugees are present in conflict affected areas, at risk from armed conflict and subject to a lack of freedom of movement and impaired access to markets/food.

The report says that about 1,925 new IDPs have been identified in the past 72 hours in a number of areas spread across north western Libya bringing the total to 41,000. It also cites unconfirmed media reports indicating that civilians north of Tarhuna are being asked by authorities to relocate in anticipation of armed conflict in the area. It adds that an unconfirmed number of civilians remain trapped in conflict areas, where electricity cuts and water shortages resulting from damaged infrastructure are common and access to essential items such as food, medicine and fuel is severely disrupted.

Armed clashes, random shelling, roadblocks and explosives placed on roads hamper the ability of humanitarian actors to evacuate civilians and to deliver needed aid, as well as the ability of civilians to move freely to safer areas or access vital goods and services, the report adds. It says that access to food is becoming more difficult throughout Tripoli, with reports that even in areas where markets remain in operation, prices of fresh vegetables and cooking oil have increased, as well as the cost of gas for cooking.

The OCHA report says that there is the need for eased and expedited import and customs procedures in light of the current humanitarian crisis. Timings for custom clearance continue to vary greatly and the lack of predictability and clarity in procedures and requirements continues to hamper humanitarian operations, as delays of up to four months have been reported. Although no specific worsening of the previous customs clearance situation was identified in relation to the current fighting, the increase in humanitarian needs calls for the current procedures to be eased to facilitate the import of humanitarian assistance into the country.

The report says that its humanitarian partner agencies agree that in light of the current increase in the need for humanitarian assistance, there is a strong need for expedited and clear import procedures for humanitarian cargo to be established by authorities and broadly shared. Fast-tracking of humanitarian cargo and the identification of a focal point among the authorities that could be contacted for matters pertaining to the import could help streamline procedures and facilitate the timely delivery of life-saving assistance, the report said.

With regards to food access, the report says access to markets for an unconfirmed number of civilians trapped in conflict-affected areas remains a key concern, particularly in Ain Zara and Tajura. Prices of fresh vegetables and cooking oil have increased, as well as the cost of gas for cooking. Access to food remains a key concern at Detention Centres exposed to or at risk of armed conflict, where 3,343 refugees and migrants are currently detained.

The volatility of the security situation, with shelling and armed clashes, continues to threaten the lives of civilians and first responders, obstructing humanitarian access and emergency response, while also burdening the overloaded and weakened health system with supply chain breaks, the report adds.