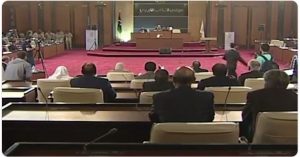 A group of HoR members hold a session in Tripoli in rejection of the Khalifa Hafter and Ageela Saleh war on Tripoli (Photo: Libya’s Channel).

Approximately 51, mainly western-based, members of the House of Representatives (HoR), Libya’s internationally recognized parliament which is officially based in Tobruk and headed by Ageela Saleh, held a session  at the Rixos complex in Tripoli today. Some sources are reporting a larger number of attendees, but this is a grand total of all who attended the sessions including non-HoR members.

The Tripoli HoR held a closed session to discuss the Tripoli war waged by Khalifa Hafter and his Libyan National Army on the capital. It is also reported that they discussed the possibility of removing the authority of Agila Saleh to appoint the General Commander of the Libyan Army in view of his support for Hafter’s attack on Tripoli. They rejected the use of force and reiterated their call for a political solution.

Besides several HoR members, it was advertised that the session will include tribal leaders and Council/Municipality members. The inclusion of these non-HoR members was intended to add credibility to the body and its session.

In their end-of-session statement, the breakaway HoR said that the session they held in Tripoli was not an attempt to carry out a coup against the Tobruk HoR nor a call for a division of the country, as evidenced by the fact that the Tripoli session was attended by members from across the country, they claimed.

They called on the Crisis Committee to play its role by attending to all those who suffered from the war and said they valued the role played by the Arab Maghreb states and those who rejected the aggression on Tripoli.

They called on the Presidency Council in its role as the Supreme Commander of the Army to appoint a General Commander for the Army (to replace Khalifa Hafter).

They renewed their call to other HoR members to attend the next Tripoli HoR session to be held next Sunday, 5 May.

They also called on the Serraj government, the judiciary and other competent entities to establish a fact-finding and documentation process of the Tripoli fighting.