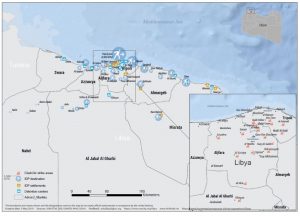 The UN OCHA map reflecting the latest state of fighting in the Tripoli conflict up to 5 May (Photo: OCHA).

In a statement released yesterday, the United Nations Support Mission in Libya (UNSMIL) congratulated all the Libyan people on the advent of the holy and fasting month of Ramadan which started today.

It also called for ‘‘an extendable one-week humanitarian truce starting at four in the morning of the first of Ramadan, 06 May, in accordance with the spirit of this month as well as the Human Rights Convention, during which all parties pledge to halt all forms of military operations, including reconnaissance, shelling, sniper operations, and mobilization of forces’’.

It called on all parties to allow the delivery of humanitarian aid to those in need and to ensure the freedom of movement for civilians during this truce. It also encouraged all parties to use the truce to exchange prisoners and the bodies of the deceased and expressed its readiness to provide the necessary support in this regard.

On the fighting front, the pro Serraj GNA forces claimed fighting was continuing at Wadi Rabea, Khallat Al-Furjan, Twesha (south of Tripoli Airport) and Gaser Ben Ghashir. They claimed that their Air Force had conducted strikes on Gharian, the Wittya Air Base and Bir Al-Alem, targeting LNA munitions. They also claimed that they now control the much contested greater Sbea area.

In a statement issued yesterday, the Serraj-aligned Volcano of Anger (Burkan Alghadab) Operation Room said that a month since defending of Tripoli from the aggressors, it forces continue to advance in a ‘‘well-studied and organized strategy, under the instructions issued by the military field Operation Room, taking into account the safety of civilians and their private properties’’.

It claimed that on Sunday its forces were ‘‘surrounding the disused Tripoli International Airport as it advanced to the centre of the airport’’, in an indirect admission and confirmation that it was no longer in control of the airport. The airport seems to have changed hands a number of times, confirming the to-and-fro fighting and ever-fluid battle fronts.

It claimed that its forces were ‘‘cracking down on the criminal militias holed up inside it, which have been using the airport as a platform to launch its rockets on the capital’’.

Thy confirmed that the ‘‘war criminal Hafter’s aircraft bombed the Al-Zahra area, trying to cover the defeats of his fleeing militias and to take revenge, but the missiles hit only civilian sites and homes near Al-Zahra bridge’’.

For its part, the Serraj-aligned forces claimed that their ‘‘Libyan Air Force carried out seven airstrikes on sites of the outlaw militias, hitting ammunition stores and destroyed vehicles that were used to bomb civilian sites in and around the capital’’.

The UNSMIL call for a ceasefire comes on the back of increasing suffering and displacement caused by the fighting. The latest World Health Organization figures of 432 dead and 2,069 wounded as a result of the Tripoli fighting. These figures are much higher than the Serraj Health Ministry figures of 187 dead and 1,257 wounded. Meanwhile, the UN Office for the Coordination of Humanitarian Affairs (OCHA) reports that there are 23 civilian deaths and 102 civilian wounded.

The Monday UNSMIL statement followed on from Sunday’s statement in which UNSMIL strongly condemned the ‘‘terrorist attack’’ on a pro Khalifa Hafter Libyan National Army (LNA) training barracks in Sebha, which was claimed by the Islamic State in the Levant (Dae’esh) and resulted in a number of Libyan casualties. ‘‘Perpetrators, organizers, financiers and sponsors of terrorist activities must be brought to justice’’, UNSMIL said.

UNSMIL said that this attack serves as a strong reminder to all Libyans, as well as to the international community, that ‘‘terrorist groups will exploit every opportunity, including the ongoing fighting in Tripoli, to expand their presence in Libya’’.

It urged all sides in Libya to refrain from further military escalation and focus their efforts instead on combating this common enemy. The lives of hundreds of young Libyans that have been lost in the fight against terrorism in Benghazi and Sirt should not be in vain, the statement concluded.

The Tripoli-based and internationally-recognized Presidency Council and Government of National Accord (PC/GNA) led by Faiez Serraj, also condemned the ‘‘terrorist’’ Sebha attack on LNA forces which it called a ‘‘heinous crime’’.

However, in its statement the PC/GNA blamed the attack squarely and directly on Khalifa Hafter. It blamed Hafter for the responsibility for the re-emergence of ISIS terror activity in Libya after it said the GNA had succeeded in getting rid of it and chasing its sleeper cells.

It reminded that it had warned on the outbreak of Hafter’s aggression on Tripoli that terror organizations would be the beneficiaries of such an aggression, providing them with the right environment to recommence their terror activities.

The GNA statement claimed that Hafter had ‘‘abandoned’’ the south of Libya ‘‘in chaos’’ after claiming that his attack there was against terrorists, as he had claimed upon his attack on Tripoli. It warned that if the international community continue their silence on Hafter’s aggression on Tripoli, the international community would be participating in the spread of terror groups in Libya.

On Saturday, the Official Spokesperson of the Serraj PC/GNA Muhanad Younis denied rumours broadcast by some of the media supporting the ‘‘criminal Haftar’’ that the GNA had received arms shipments from Turkey.

During a press conference by the Serraj Ministry of Health on Saturday announcing the death of 187 and the wounding 1,257 people since the beginning of the aggression against Tripoli, the Serra government of vowed to treat the wounded in ‘‘developed’’ countries until they fully recover.

The Ministry of Health reassured the public that there was a strategic stockpile of medicines and operating materials for months to come, and that the health situation was under control. It praised the ‘‘efficiency of the Libyan physician for providing a medical service to the wounded around the clock’’.

It also announced the availability of blood stocks in the Central Blood Bank and praised the degree of awareness among citizens who spontaneously called for voluntary blood donations which resulted in an average 300 daily blood donations.

It confirmed the commitment of the GNA to provide all the means for the wounded to be treated inside and outside the country.

It also announced the dispatch of 370 wounded for treatment in Tunisia, 10 to Italy, 4 to Ukraine, 3 to Germany, and 2 to Turkey.

On the humanitarian front, the latest UN OCHA report confirmed that the armed conflict ‘‘continued along established frontlines’’. It confirmed that armed clashes and the use of ‘‘rockets/artillery and airstrikes’’ were reported in ‘‘Ain Zara, Wadi Al Rabea and Khallat Al Furjan districts as well as continued engagements around the Yarmouk barracks, the Al Twaisha area south of Tripoli International Airport and Al Zatarnah area southeast of Tarhuna’’.

However, it said no armed conflict incidents impacting civilians or residential areas were reported. It said that the 102 civilian casualties, including 23 civilian deaths, included four health workers killed, with one other doctor injured, since hostilities commenced.

The report said that the humanitarian situation continues to deteriorate as a direct result of the armed conflict. A rapid assessment of eight conflict-affected municipalities (Abu Sleem, Hay Al-Andalus, Janzour, Khallat Al Furjan, Salah Al-Deen, Gaser Bin Ghashir, Swani Bin Adam and Tajura) found that food security and market access have been negatively impacted in most of the assessed areas.

The report said that even in areas where markets are sometimes open, most respondents reported that they are unable to purchase most of their needed items. The assessment also found that access to cash and availability of services were impacted to varying degrees based on area, with water services least affected in seven of the eight municipalities assessed, electricity not available or interrupted in all but one municipality and access to cash impacted to some extent in all eight of the municipalities assessed.

Health services were reported to be negatively impacted in six of the assessed municipalities. Across the board, education has been the worst impacted, with schools entirely or partially non-functioning in six of eight municipalities. In addition, civilians trapped in conflict areas continue to be unable to move freely to safer areas due to the security situation, while general lawlessness, including looting of IDPs’ homes, is on the rise. More than 50 individuals were evacuated from conflict areas in the past 24 hours.

As a result of the armed conflict, the report says that nearly 55,000 persons have now fled their homes. About 4,350 new IDPs have been identified since 2 May in Garabolli, Tajura, Suq Al Jumaa, Msallata and Surman. Most newly identifed IDPs are displaced from Khallat Al Furjan, Wadi Al Rabea, Ain Zara and Airport Road areas. The areas of origin of IDPs have remained relatively consistent over the past weeks, as frontlines have remained largely static, the report confirms.

However, it says that the displacement areas of IDPs increasingly extend to areas outside of Tripoli, along the coastal line in Western Libya. It says that 29 collective shelters are now in operation, estimated to house some 550 IDP families (approximately 2,750 individuals), with the majority of IDPs staying in urban areas with family/friends or in rented accommodation.