Hafter and Saleh no longer possible partners for political dialogue: Serraj to Macron 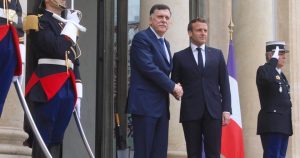 Faiez Serraj told Macron in Paris yesterday that he no longer considered Hafter and Saleh possible partners in a political dialogue after Hafter’s attack on Tripoli (Photo: PC/GNA).

Serraj was in Paris yesterday after having visited Berlin and Rome as part of his Europe-wide diplomatic drive to get the international community to condemn and reverse Hafter’s attack on Tripoli launched on 4 April.

During the talks Serraj also stressed his firm position to confront Hafter’s ‘‘aggressor forces’’ in defence of the capital and to protect the people. He insisted that ceasefire calls must be accompanied by the withdrawal and return of the ‘‘aggressor troops’’ to their point of origin. He also stressed that any mechanism proposed by the international community in this matter must meet this ‘‘fair demand’’.

Serraj also added that the basis of negotiations for a Libyan political solution had now changed after the Tripoli attack. He demanded that the Libya’s eastern region, who Hafter and Saleh represent, should choose new political representatives in order to return to the political path – instead of Haftar or Saleh.

On France’s position, Serraj refrained from directly accusing France of supporting Hafter but referred to ‘‘successive reports of a French intervention in support of the aggressor forces’’. He said these reports created an ‘‘angry Libyan public opinion towards France, which was evident during the mass demonstrations in Tripoli, so it is essential that this attack be clearly condemned, and that the aggressor is not equated with the victim’’.

For his part, President Macron was quoted by the Serraj government as having welcomed Serraj’s visit to Paris, and reiterated France’s ‘‘support’’ for his Government of National Accord. Macron was said to have ‘‘understood’’ Serraj’s ‘‘position’’. Macron also declared his ‘‘opposition to the attack on Tripoli’’ and called for a ‘‘commitment to the United Nations initiative for a comprehensive political solution in Libya’’, stressing that France will ‘‘make its efforts in that direction’’.