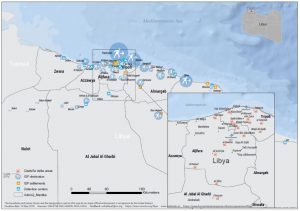 The OCHA map covering the period up to 10 May (Photo: OCHA).

After visiting Rome, Berlin, Paris and London last week, Serraj arrived in Brussels today where he met both Federica Mogherini, High Representative of EU Foreign Policy and Donald Tusk, President of the European Council. The visit by Serraj comes ahead of the EU Foreign Affairs Council meeting today.

At the meeting, the Serraj government reported that Mogherini had reiterated the European Union’s support for the internationally-recognized Libyan Government of National Accord, stressing that there was no military solution to the Libyan crisis, and the need to stop the attack on Tripoli and a return to the political track in accordance with Ghasan Salame’s UNSMIL plan.

For his part, Serraj expressed his aspiration for a common European position which describes things as they really are, and which contributes practically to the saving of Libyan blood. He said that every day that passes increases the numbers of Libyan victims and expands the war which will not only affect Libya but the entire region.

Without naming Egypt, UAE or Saudi Arabia, which are widely perceived by a large swathe of the Libyan public to be supporting Hafter militarily, Serraj called on the European Union to intervene in order to stop the violations committed by ‘‘some states’’ by supplying the aggressor force (Hafter) with weapons, in clear violation of the Security Council resolution banning the supply of weapons to Libya. Serraj maintained that the Tripoli battle in reality is between those who wanted to militarize the state and those who want to uphold the civil state.

Serraj reiterated that any talk of a ceasefire must bring about the withdrawal of the aggressor forces (Hafter) and their return to where they came from.

In his meeting with Donald Tusk, Serraj outlined the position of his government and expressed his surprise by the Hafter attack on Tripoli as his government was preparing to hold the UN-brokered National Conference (Multaqa) in Ghadames.

Serraj stressed that his ‘‘government forces’’ were exercising their legitimate right to repel the treacherous aggression until it is defeated and demanded a common and just European position not equating between the aggressor and the victim.

Serraj added that the aim of Hafter’s Tripoli attack was clear to all as an attempt to abort the political process and restore totalitarian rule to Libya, which he said would not happen.  He stressed that the will of the people would prevail to build their desired civil state, a state of the rule of law and institutions.

Tusk was reported by the Libyan government stressing that Libya was a strategic partner of the EU, and that its stability was crucial to the security of the region in the southern Mediterranean and the Sahel region.

Tusk was also reported as saying that the attack on Tripoli threatened the peace process that had taken a long way to reach a settlement. He also stressed that the European Union would work to find a formula for a ceasefire and contribute to a peaceful and democratic solution within the framework of the United Nations.

Donald Tusk also tweeted that he had ‘‘Discussed the situation in Libya with PM al-Serraj this morning. The EU calls on all parties to immediately implement a ceasefire. All parties should re-commit to the UN-facilitated political dialogue. There is no military solution.’’

On the fighting front meanwhile, the battle lines remain largely unchanged as a stalemate seems to dominate.

The death and casualty toll continued to rise as the World Health Organization (WHO) reported that the Tripoli armed conflict had now killed 454 people and wounded 2,154 people, including three ambulance workers whose vehicle was struck. The latest UN Office for the Coordination of Humanitarian Affairs (OCHA) report stated that there were 111 Health Sector verified civilian casualties, including 23 civilian deaths.

The Serraj side confirmed that the Hafter LNA had carried out air strikes on Thursday in Janzour, Wadi Rabea and at the Islamic Call Society headquarters off Swani Road and that back up troops were arriving in Tripoli from Misrata.

There were also LNA air strikes in Tajura and Zawia. The Tajura strike was claimed to have been conducted by a drone hitting an area with no clear military purpose. the Serraj aligned forces claimed it led to the injury of at least two civilians, including a child. The Zawia hit was claimed to be on a militia base there.

On the humanitarian side, OCHA confirmed on 8 May, a clearly marked armoured ambulance vehicle carrying the Director of Tripoli’s Ambulance and Emergency Medical Services in the Twaisha area of Gaser Ben Ghasheer was hit in what it referred to as ‘‘an apparent direct attack’’. It confirmed that the hit injured two paramedics and left the Director in critical condition with the loss of both his legs in the attack.

OCHA said that this was ‘‘the latest in an alarmingly high incidence of attacks on first responders and medical staff’’.  It reminded that since the beginning of the offensive in Tripoli, 4 health workers have been killed, 4 have been injured, 12 ambulances have been impacted and 2 health facilities were evacuated as a result of armed clashes, shelling and airstrikes.

These incidents, it said, further hamper the ability of already overstretched health services to provide vital assistance to civilians, including those inured as a result of armed conflict.

On 9 May, the Humanitarian Coordinator condemned the incident as a serious breach of International Humanitarian Law (IHL). WHO likewise condemned the incident in a statement on 9 May. It remined that all parties to the conflict are obligated to take constant care to spare civilians and civilian objects, including medical personnel and assets. Deliberate attacks on clearly marked medical transports constitute war crimes under International Human Rights Law (IHL).

The report revealed that approximately 62,700 persons have now fled their homes as a result of the armed conflict. About 3,900 new IDPs have been identified since 7 May. The majority of IDPs are staying in private accommodation, with friends and relatives or in rental accommodation, mainly in urban areas of Tripoli. Many IDPs have also moved to areas along the coastal line of Western Libya and the Nafusa mountains, while approximately 2,700 IDPs are hosted in collective shelters established by local authorities and first responders.

Up to date, the report said that 29 collective shelters have been set up, the majority of which are in schools with some others in hotels, resorts and university dorms. An increasing number of IDPs are being identified in areas further away from Tripoli, a trend which is likely to increase the radius in need of humanitarian assistance.

Over the night of 7-8 May, the report confirmed that airstrikes against a GNA compound in Tajura caused damage and injured two persons within the Tajura detention centre (DC) located in close proximity, in which some 564 refugees and migrants were detained at the time.

In a statement on 8 May, UNHCR called for all refugees and migrants in DCs in conflict areas to be immediately evacuated to safety. On 9 May, UNHCR transferred 228 individuals from Zawia (116 Individuals), Tajura (68 individuals) and Al Sabah (44 individuals) DCs to the UNHCR’s Gathering and Departure Facility (GDF) in Tripoli. This leaves approximately 3,300 refugees and migrants trapped in DCs in areas exposed to or at risk of armed conflict and where access to food, water and healthcare are severely restricted due to the conflict.

The international humanitarian community, the report said, continues to call for these individuals to be immediately released and provided with safe shelter until their asylum claims can be processed or they can be provided with safe repatriation assistance for reunification with their families. The international humanitarian community likewise urgently reminds parties to the conflict of their obligations under IHL to refrain from positioning military assets in or near civilian objects, including places of detention.

The OCHA report goes on to explain that the conflict in and around Tripoli is making it increasingly difficult for assistance to reach people in need in other areas of the country, particularly in the southern region, where the recent conflict has exacerbated existing humanitarian concerns.

The disruption of transport of key goods, due to the presence of conflict and combatants along major trade routes is increasing the severity of already existing shortages. Reportedly, the report says, delivery of fuel to petrol stations in the south has ceased since the start of the conflict in Tripoli, leaving residents to resort to the black market and facing high price increases.

Access to food, gas cylinders for cooking, electricity, cash liquidity and health services are also reported to be restricted. Parties to the conflict have pulled some of their forces from the south to join the frontlines in around Tripoli, reportedly leading to increased lawlessness and security incidents, especially along the Jufra trade route, also contributing to the shortages in supplies of essential items, the report says.

Displaced and conflict-affected individuals, including refugees and migrants, face obstacles in meeting basic food needs due to disruption of supply chains, market closures and rising prices brought on by scarcity.

Conflict-affected individuals – including IDPs, refugees and migrants, and civilians trapped in conflict areas – have had their access to health care services severely disrupted. Injured civilians and persons with specific medical needs are in urgent need of medical assistance – assistance which is increasingly strained due to attacks impacting health workers and facilities.

The report also says that instances of kidnapping, forced disappearance and arrest of civilians (including IDPs) originally from the east of Libya (due to their perceived political affiliation) have been increasing.