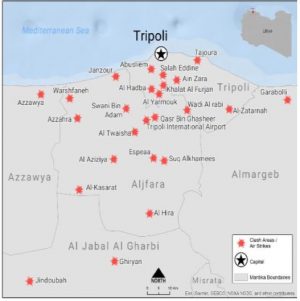 The OCHA map showing the latest areas of clashes in the Tripoli fighting up to 17 May. It confirms the status quo in the battlefronts (OCHA)

The humanitarian situation continues to deteriorate as a direct result of the armed conflict in and around Tripoli, the latest UN Tripoli Office for the Coordination of Humanitarian Affairs (OCHA) says.  But it also confirms that during the past week ‘‘a form of status quo in the conflict dynamics in Tripoli has allowed access to some urban areas where humanitarian actors were previously unable to reach’’.

This dynamic, however, could be changed as the arrival of new weapons and arms to both sides of the conflict seem to be openly paraded.

The OCHA report says that the use of explosive weapons – including artillery shelling and aerial bombardment – in populated areas continues to cause civilian casualties. It confirmed that at least six people were killed and five people were injured in an apparent airstrike in Gasr Ben Ghashir on 14 May. It also established that 126 civilian casualties, including 29 fatalities, have now been confirmed since the beginning of clashes.

It reminded all parties of their obligations under international humanitarian law to take all feasible measures to avoid civilian harm, and called on all parties to refrain from using explosive weapons – including by aerial bombardment or shelling – in populated areas, given their likely indiscriminate effect.

On the ground, the report says that since the onset of hostilities on 4 April, over 75,000 individuals have fled their homes. Of these, over 48 per cent are estimated to be children and 51 per cent to be women. The rate of displacement has decreased somewhat since the start of the conflict, yet armed conflict continues to drive more and more families from their homes. The majority of IDPs are staying in private accommodation, with friends and relatives or in rental accommodation, mainly in urban areas of Tripoli.

Many IDPs have also moved to areas along the coastal line of Western Libya and the Nafusa mountains, while approximately 2,700 IDPs are hosted in collective shelters established by local authorities and first responders. 29 collective shelters have been set up to date, the majority of which are in schools with some others set up in holiday resorts and university dorms.

An increasing number of IDPs are being identified in areas further away from Tripoli, a trend which is likely to increase the radius in need of humanitarian assistance.

Humanitarian actors estimate that over 100,000 men, women and children remain trapped in immediate frontline areas, with over 400,000 more in areas directly impacted by clashes. Concerns are high for civilians unable to leave these areas, as conditions deteriorate, and emergency services are unable to get through.

Water and electricity cuts are being reported from frontline areas, while market access and availability of food is very limited. Humanitarian actors continue to appeal for a humanitarian truce to allow civilians trapped in conflict areas to move freely to safer areas and for assistance to reach those in urgent need, the report says.

Humanitarian actors are extremely concerned for the safety and wellbeing of nearly 3,400 refugees and migrants trapped in detentions centres (DCs) exposed to, or in close proximity to, the fighting. In addition to the risk posed by armed clashes, access to food, water and healthcare is severely restricted at these facilities as a result of the conflict.

The impact of clashes is being felt outside of Tripoli, as more IDPs arrive in other areas and disruptions in supplies of essential goods such as food and fuel exacerbate already existing scarcities in the south of Libya. The areas south of the battlefront remain largely inaccessible to humanitarian actors due to fighting and random shelling. However, during the past week a form of status quo in the conflict dynamics in Tripoli has allowed access to some urban areas where humanitarian actors were previously unable to reach. Humanitarian partners continue to express concern over lengthy delays and inconsistencies in the import and customs clearance of humanitarian cargo entering Libya and call for the fast tracking of aid shipments to ensure timely delivery to affected populations.

Humanitarian partners continue to provide assistance, where access allows. Over 42,400 people have received assistance since the start of the conflict. However insufficient access and funding are impeding response operations. On 18 April, humanitarian partners launched a flash appeal for $10.2 million in support of the Tripoli response. However only 30% of the funding requirement has been pledged/received to date, the report says.

Meanwhile, both the internationally recognized Faiez Serraj-led Presidency Council and Government of National Accord and the National Oil Corporation (NOC) condemned Saturday’s attack by ISIS on Zella (Zellah).

The Presidency Council said that the Khalifa Hafter attack on Tripoli will increase crime and terrorism as these unlawful elements exploit the resultant security vacuum.

In its condemnation statement, the NOC revealed that extremists stormed the main gate between Zellah city and the local oilfield operated by NOC subsidiary Zueitina Oil Company (ZOC). The attack resulted in three reported casualties, including one Libyan citizen.

The NOC said that the incident caused no immediate impact on operations and that ZOC management held an emergency meeting to review security protocols, requesting that the local Petroleum Facilities Guard take necessary precautions.

NOC chairman, Mustafa Sanalla, denounced the attack and warned of the risk to the oil sector from current hostilities. He said that the “NOC strongly condemns today’s (Saturday’s) terrorist attack that could have easily endangered oil sector workers and infrastructure. The incident highlights the fragile security situation in our country and the need for an immediate ceasefire. Ongoing hostilities have created a security vacuum that extremists are now taking advantage of – potentially plunging Libya into even deeper chaos.”

The NOC said that it denounces all conflict and the impact it has on attempts to rebuild the energy sector, and subsequent loss of international investor confidence.

Meanwhile, the Man-made Water Authority, the entity responsible for supplying Tripoli and north western Libya with water, reported today that its control centre at Shwerif was raided by militias yesterday, forcing it to shut down its valves supplying the area. The control centre is located in an area nominally under the control of Khalifa Hafter and his aligned forces. The Serraj-aligned Ministry of Interior has condemned Hafter for this act and called on the international community to take note of this crime against civilian populations.

On the diplomatic front, UNSMIL head Ghassan Salame concluded a 3-day visit to Washington where UNSMIL reported he had held in-depth discussions with senior USA Administration and congress officials. The visit come as part of his intensive efforts to restore a ‘‘unified international position on Libya to end to its current crisis’’, UNSMIL reported.

The Salame Washington visit came as video clips and photographs purporting to show both sides of the Tripoli fighting receiving new arms supplies from their external backers. Both sides have long accused the other of receiving financial and military support from other countries.

On the battlefront, Mohamed Gnunu, the Official Spokesperson for the Faiez Serraj-aligned Government of National Accord (GNA) Volcano of Anger/Rage Operations Room, reported on Saturday that forty-two days after what he called the ‘‘failed coup attempt’’ by Khalifa Hafter, his Libyan National Army (LNA) and aligned forces, the GNA armed forces ‘‘continue their solidarity in withstanding the criminal gangs’’.

He said that the GNA forces ‘‘each day realize a new victory by draining the materiel of the rebel militias, in specific operations on all axes, by air and by road’’. Gnunu revealed that the pro-GNA troops were ‘‘awaiting military instructions to crush the enemy and cleanse the capital and all Libyan cities of its evil’’.

Gnunu reported that he GNA-aligned Libyan Air Force continues, on a daily basis, to strike at the positions of criminal gangs, the most recent of which was the execution of five combat sorties, which targeted heavy machinery in Gaser Ben Ghashir, and destroyed two tanks and heavy artillery, which were directed towards the centre of Tripoli.

He also reported that the GNA-aligned Libyan Air Force confirmed the ‘‘intensification of its reconnaissance aircraft coverage’’ of the area from the east of Sirte to Al-Jufra and Ras Ajdir, ‘‘coinciding with the beginning of its night operations’’.

The official GNA-aligned forces spokesperson said that their forces from the Central Military Region stationed in the southern and eastern axes continue their operations to cut off the supply of the criminal militias, especially between the Jafra and Shwerif, and to apprehend those fleeing the battlefield on the outskirts of Tripoli.

Gnunu placed full responsibility for the Zalla terror attack on the ‘‘criminal militias of the war criminal Hafter’’, who he said was ‘‘responsible for the chaos and insecurity in southern Libya, causing the resurgence of terrorist cells and their implementation of operations in Ghudwa, Fugha and Zalla.

He renewed the call to civilians caught up in hotbeds of tension to communicate with the GNA-aligned forces to facilitate their exit in coordination with humanitarian organizations in order to preserve their safety and security, and also to move away from the concentration of ‘‘criminal gangs, especially in Gaser Ben Ghshir and the Sug al-Khamis Msehil and Al-Asaba”.