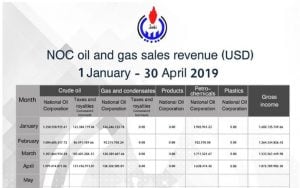 Libya’s National Oil Corporation (NOC) recorded an April oil income of US$ 1.87 billion which is a monthly increase of approximately US$ 340 million USD or +22 percent.

The NOC said that the revenue figures were bolstered by a rise in global crude oil prices, in addition to a busy crude loading schedule at the end of March, resulting in cargo receipts both arriving and clearing in April’s revenue statement.

Commenting on the current operational challenges, the NOC chairman, Mustafa Sanalla, said that the “NOC’s five-year strategy and focus remain on increasing production and national oil revenues. The corporation has mitigated many conflict-related risks and maintained production through the implementation of a robust operational and crisis response plan’’.

“The situation, however, remains extremely volatile. Protracted conflict (in and around Tripoli) will undoubtedly disrupt national operations, either directly, or via a security vacuum that extremists take advantage of – as demonstrated by the (Saturday) Zellah terrorist attack. The corporation is already experiencing logistical difficulties regarding supplies and our ability to rotate shift workers. NOC reaffirms its call for an immediate cessation of hostilities and condemns all attempts to militarise national energy infrastructure,” added the chairman.

Furthermore, the NOC said that it rejects all attempts to portray the corporation as a party to the conflict. Attempts at disinformation to justify the illegal export of oil will be met with the strongest legal response. All national oil revenue is transferred to the Libyan Central Bank and transparently disclosed on a monthly basis. The NOC said that it is proud of its internationally-recognised adoption of transparency standards that serve as a benchmark for all Libyan institutions.