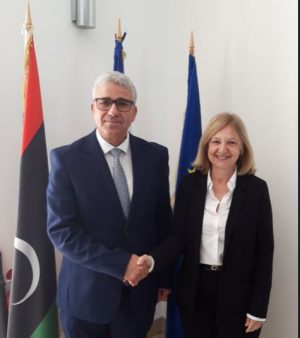 France’s ambassador to Libya, Béatrice le Fraper du Hellen met with Libya’s Government of National Accord Interior Minister, Fathi Bashagha, in Tunis yesterday in a sign of rapprochement between the two countries.

The two countries had verged on a total diplomatic fallout as the internationally-recognized Faiez Serraj-led Presidency Council and Government of National Accord accused France of supporting Khalifa Hafter following his 4 April military attack on Tripoli.

France was accused of blocking any EU attempts to condemn Hafter as the aggressor and for calls for Hafter to withdraw to the status quo ante. France was also accused – together with Russia – of any UN Security Council condemnation of Hafter.

Relations reached a point where the Serraj government briefly threatened to use a bureaucratic technicality to block any French companies operating in Libya. The action was subsequently reversed.

In Tunis yesterday, the Serraj government announced that the two countries had agreed on ‘‘several special security topics in the field of counter-terrorism, organized crime and civil defence, as well as economic crimes and money laundering’’.

The meeting also took place, the Serraj government said, ‘‘to prepare for the conclusion of security memorandums in the interests of the two countries’’.

The Serraj administration reported that the French Ambassador expressed the ‘‘gratitude ‘’of the French Government to the Government of National Accord as ‘‘the legitimate government of Libya, and fully supported it as representing the Libyan people as a whole, which is the main legitimate source for the conclusion of conventions and laws with them’’.

The French embassy in Tripoli, on the other hand, reported the meeting briefly as a ‘‘Friendly and fruitful meeting between the Ambassador of France in Libya and the Libyan Minister of the Interior Bashagha to discuss the situation in Libya and reaffirm the importance of bilateral cooperation’’.