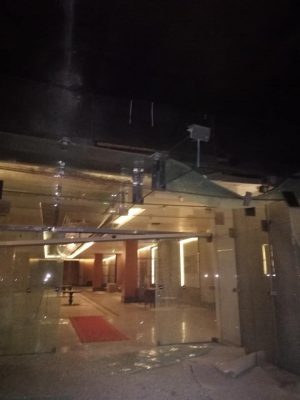 The Rixos conference room used by the Tripoli breakaway HoR members was the subject of an airstrike attributed to the Hafter-led LNA forces (PC/GNA MoI).

The Faiez Serra-led Presidency Council and Government of National Accord (PC/GNA) has condemned the airstrike on the Rixos complex in Tripoli that has recently been the seat for the breakaway group of House of Representative (HoR) members opposed to Hafter and his attack on Tripoli.

The attack was also condemned by the Tripoli breakaway group of HoR members.

The strike was believed to have been carried out by a drone as opposed to a fighter jet and was carried out early this morning. It caused structural damage mainly to the entrance of the conference centre. No casualties were reported.

The Rixos hotel and conference complex is located in the busy residential and shopping area of Bab Ben Ghashir. It is not far from Libya Herald’s Tripoli office. The area is especially busy late at night and in the early hours of the morning at this time of the year – during the fasting month of Ramadan.

The PC/GNA condemned the ‘’crime committed by the aggressor (Hafter’s) forces in striking early on Friday morning the site of the (Tripoli-breakaway) HoR in the centre of Tripoli’’. It said that this attack is ‘‘considered a new and grave contravention of the International Human Rights Law which prohibits the targeting of civilians and civil sites’’.

The statement added that the targeting of this site was symbolic as it ‘‘witnessed the birth of the first Libyan legislative body after the February (2011) revolution and the country’s symbol of the start of the phase of the peaceful transfer of power’’.

The airstrike, the statement added, ‘‘clearly expresses the insistence of the aggressor on targeting any symbols of the civilian state and was a miserable effort to silence the nation’s parliamentarians. It also confirms the aggressor’s policy aimed at killing, terrorizing and militarizing the state’’.

The PC/GNA went on to place the full domestic and international responsibility for this crime on the aggressor forces. It assured that its aligned forces were ‘‘continuing successfully their opposition to the aggressors and in achieving success on the ground in all fighting fronts’’. It said that it was this success that was ‘‘driving the aggressor forces to these blind strikes’’. The pro-GNA forces will continue their duties until they destroy the enemy, the statement concluded.

Notably, the PC/GNA condemnation statement did not mention Khalifa Hafter or his Libyan National Army (LNA) by name, which it usually does. However, an earlier condemnation statement by Serraj-aligned Ministry of Interior (MoI) and the pro Serraj Volcano of Rage Operations Room did. The MoI called on the international community to ‘’assume its responsibilities towards this aggression against the capital, Tripoli, which threatens the security and safety of safe and unarmed civilians’’.

It is noteworthy that the Rixos complex, the seat of Libya’s first post-Qaddafi parliament, the General National Congress (GNC) after the 2012 elections, has been used by a breakaway group of HoR members opposed to Hafter’s war on Tripoli. They are not sanctioned by the Tobruk-based HoR.

Khalifa Hafter, his Libyan National Army (LNA) and their allied forces had launched an attack on Tripoli on 4 April under the pretext of liberating the city from extremist and Islamist militias.