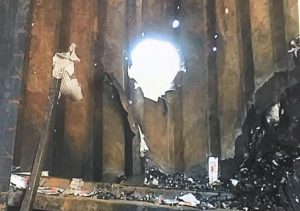 A NOC photo purporting to show the entry point of a shell fired at the NOC clinic in Tripoli (NOC).

Libya’s National Oil Corporation (NOC) claimed today that Friday’s Tripoli Oil Clinic fire in the Gharghour district of Tripoli was caused by direct shelling of the facility. It claimed that an Internal Security Agency investigation and forensics report reviewed debris found in the destroyed warehouse which led to this conclusion. The NOC reiterated that shelling of civilian targets is a war crime.

The NOC condemned in the strongest possible terms the targeting of civilian infrastructure and medical facilities. Although the incident did not result in casualties, the NOC said that it is extremely concerned that hospital patients and staff were purposefully endangered. It called for an international investigation and prosecutions following this breach of international humanitarian law.

NOC chairman, Mustafa Sanalla said: “The targeting of such a facility is a heinous act. Attacks on civilian infrastructure as well as the oil sector have unfortunately become an everyday occurrence. Only through God’s grace were patients and staff spared. A ceasefire must be called to put an end to this senseless violence.”