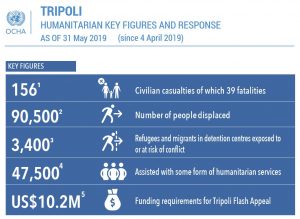 The ongoing conflict in and around Tripoli continues to drive civilian casualties and displacement, the UN Tripoli Office for the Coordination of Humanitarian Affairs (OCHA) reports. It says 156 civilian casualties, including 39 civilian deaths, have been recorded to date. These figures include only those cases that could be individually verified as civilian and are considered to be the minimum.

The World Health Organization, on the other hand reported today that the Tripoli conflict has led to 607 deaths and 3,261 wounded since 4 April.

On the fighting front: The Tripoli narrative

On the battlefront, meanwhile, the two sides continue to claim success and progress while a stalemate seems to be the dominant outcome on the ground.

At a Saturday press briefing, Mohamed Gnunu, the Official Military Spokesperson for the Faiez Serraj aligned Volcano of Anger/Rage (Burkan Alghadab) Operations Room, said that the Tripoli Air Force carried out precision airstrikes on Friday night against the ‘‘militias of the war criminals’’ in military camps near Gharian, which he said were preparing to join the ‘‘criminal militias’’ based around the capital.

He claimed that the Tripoli forces used a new tactic on Saturday in which they combed large areas around the disused Tripoli International Airport, with intensified artillery strikes on the Hafter forces’ sites, which made them flee, leaving their positions.

He claimed that the frontlines moved forward on Saturday in favour of the Tripoli forces in the areas of Yarmouk, Al-Ramlah, Wadi al-Rabea, Ain Zara, Ahya Al-Baria area and Swani, ‘‘in perfect coordination, and combed large areas where enemy vehicles were destroyed and others were taken over’’.

It will be noted that fighting has been ongoing virtually since the outbreak of fighting in Wadi Rabea, Ain Zara, Swani and Yarmouk – an indication of how little real movement there has been by either side on the ground.

Gnunu claimed that on Saturday the Tripoli advanced forces destroyed an Emirati-armoured vehicle and a tank, in addition to five armed vehicles, and seized an armoured vehicle and other five vehicles after the enemy drivers were forced to flee as a result of strikes.

On the Ain Zara frontline, he said that the Tripoli forces were able to deal with snipers hiding on residential buildings, forcing them to flee.

“The Libyan Arab Armed Forces (LNA) have thwarted all counter-attack attempts carried out by the so-called GNA militias during the past two days” LNA spokesperson Maj.Gen. Ahmed Al-Mesmari claimed at a press conference in Benghazi yesterday.

He claimed that more than 31 ‘‘terrorists were killed, a large number of vehicles, tanks and artillery were destroyed, as well as capturing tens of terrorist militants with about 25 vehicles retrieved’’.

These armed militias’ operations major focus is on the disused Tripoli International Airport, with the armed forces holding clashes in other front, yet the LNA forces thwarted them, he claimed.

He said that the LNA Air Force (LNAAF) carried out strikes from Aziziya to Kremia and targeted movements of armed militias in other areas.

He said the LNA had spotted IS movements in more than one location, indicating that the terrorist organization was making visual attempts, which meant that its strength was weak.

Mesmari added that the LNA forces had ‘‘killed a large number of terrorists fleeing Benghazi in the past few days in Tripoli’’.

On Sunday, the LNA War Information Division (WID) denied that the images of a downed Unmanned Aerial Vehicle or drone (UAV) displayed by the Tripoli forces with a UAE flag on it had belonged to them. The Tripoli forces had claimed that it was downed in the Aziziya area

The WID claimed that the episode was a propaganda stunt by the Tripoli side reminiscent of the stunt of shelling Tripoli residential neighbourhoods in an attempt to discredit the LNA.

On Saturday, the LNA’s Dignity Operations Room also claimed the shooting down of what it referred to as a ‘‘Turkish aircraft after it was indiscriminately attacking residential areas in Gharian’’.

On the political front, Presidency Council and Government of National Accord head, Faiez Serraj, took part in the Islamic Conference in Mecca, Saudi Arabia on Friday.

In Mecca, Serraj told his Saudi hosts that he looked forward to them adopting a political position on the Tripoli conflict that did not equate the aggressor on Tripoli (Khalifa Hafter, his Libyan National Army (LNA) and their allied forces) and the victim.

He continued to demand, as on all his recent international visits, that the aggressor forces return to the places from which they had come. He also hoped the Saudis would contribute in practical terms to the saving of Libyan blood.

Without mentioning the states by name, Serraj said that the states supporting Haftar (widely believed to be Egypt, the UAE, maybe Jordan and possibly Saudi Arabia itself) and supplying him with weapons were contributors to the violations committed, as the supply of weapons is a clear violation of the UN Security Council’s decision to ban armaments supply to Libya.

For their part, the Serraj administration reported that the Saudis stressed the deep relations between Saudi Arabia and Libya, stressing Saudi’s keenness to stabilize Libya, stopping the fighting between the Libyan brothers, and stressing that there is no military solution to the Libyan crisis, and that the solution lies in returning to dialogue and understanding.

The Saudis said that they were ready to play a role in this direction and support a Libyan national project that represents Libyans and meets their wishes, and stressed that Libya’s stability will be positively reflected on the Libyan neighbours and the entire region. It will be seen if the Saudi promises will in reality be reflected on the ground through a restraining influence on their allies Egypt, UAE and Jordan.

Meanwhile, as queues at petrol stations started to form in the Greater Tripoli area, the Serraj administration yesterday assured the public that the crisis is abating. A fuel tanker docked in Tripoli on Saturday loaded with 33 million litres of fuel, which the Tripoli government said would resume normal fuel supply within the next 24 hours. The Serraj government said the tanker’s arrival had been delayed due to bad weather

The OCHA report covering the period to 31 May says about 95,500 people have now had to flee their homes in search of safety. Half of these are estimated to be children. Humanitarians agencies estimated that over 100,000 civilians remain in immediate front-line areas, with over 400,000 more in areas directly impacted by clashes – defined as being within 1 kilometre of the battle front. The report says that concerns are high for civilians remaining in these areas, as conditions deteriorate, and emergency services are unable to get through to them.

Refugees and migrants at risk

Humanitarians agencies are also extremely concerned about the safety and wellbeing of 3,400 refugees and migrants trapped in detentions centres already exposed to, or in close proximity to fighting. The report also says that access to food, water and healthcare is severely restricted at these facilities. Refugees and migrants outside of detention centres are also at heightened risk, and face discrimination in accessing collective shelters and other services.

Where access has allowed, humanitarian agencies report that they have reached over 47,000 people with critical aid since the onset of Tripoli clashes on 4 April. However, the report says that insufficient access and an outstanding funding gap are severely hampering response operations.

The report says that water and electricity cuts are being reported from frontline areas and water supply from the Man-Made River (MMR) network into Tripoli has been reduced by 37 per cent. The report says that about 1.5 million people, including 600,000 children, rely on the MMR as their primary supplier of freshwater.

The reduced water supply is the result of a stall in required maintenance works to the network, as international workers were evacuated as a result of the hostilities. Disruptions at pumping stations have placed additional pressure on the limited water supply. An apparently deliberate shutdown at a water pumping facility in Zliten on 26 May temporarily disrupted water provision to the coastal cities of Misrata, Garabolli, Al Khoms and Zliten. On 19 May, an armed group had stormed a pumping facility in Jabal al-Hasawna, temporarily disrupting water supply to Tripoli and the western region.

“Continuous attacks on the water system further jeopardize levels of health and hygiene among the civilian population”, the UN Humanitarian Coordinator for Libya Maria Ribeiro warned last week, “particularly those most vulnerable, including children, and cause further hardship and possible displacement.”

Supply lines to six power stations in the outskirts of Tripoli have been severed as a result of the clashes, disrupting electricity supply in conflict-affected areas, according to Libya’s main national electrical company GECOL. Technical teams have been unable to inspect the damage or carry out repairs due to the security situation. Cuts to electricity, used for water pumping, further impact the availability of water in affected areas, the OCHA report adds.

The risk of Gender-based Violence, particularly sexual exploitation and abuse, continues to increase as a direct result of ongoing conflict, the report says. An increasing degree of lawlessness has been reported in conflict areas, including sexual violence perpetrated by combatants. Food insecurity, decreased cash liquidity and market access and availability of water and electricity are all critical factors that further expose women and girls already traumatized by the ongoing conflict and who, as a result, need of some form of psychosocial support, safety and protection.

Non-Libyan women and girls are at greater risk of GBV, further heightened by their overall more limited shelter options.

UNFPA in collaboration with implementing partners has deployed mobile teams comprised of specialized social workers and psychologists to provide GBV-related services to IDPs in collective shelters and urban settlements. But funding to upscale GBV programming in the outskirts of Tripoli is urgently needed, the report says.