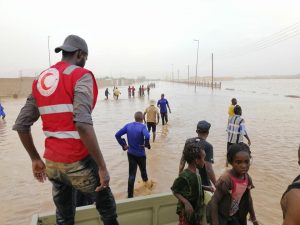 Torrential floods over the last two days in most of the Ghat Municipality have led to at least two deaths and the displacement of 1,000 people, the UN Libya Office for the Coordination of Humanitarian Affairs (OCHA) has confirmed.

OCHA says that Ghat, which lies some 1,300 km south west of Tripoli on the Algerian border, is in need of urgent humanitarian aid, including food, non-food items and temporary shelter.

The Municipality says that most telecommunications, electricity and local media have been cut and food stocks destroyed as the it appeals for local and international help.

It is estimated that 70 percent of the municipality with a population of 30,000 has been flooded with the fear of a greater health disaster as sewage water has mixed with the area’s drinking water.

As the heavy rains have continued to fall and aid has been slow to arrive, the municipality is fearful that the disaster could worsen.

For their part, the Tripoli Faiez Serraj government yesterday declared the area a disaster zone and allocated LD 10 million to deal with the effects of the flooding.

The convoy will contain foodstuffs (basic food commodities), medical supplies and fuel, with other deliveries expected to follow.