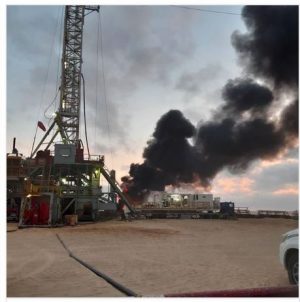 The NOC has reported that its Raguba development well is going into production(Photo: NOC).

It reported that the well will add 1,102 barrels per day (bpd) to local production.

Technically, the NOC said that development testing, concluded on 4 June, utilised a mobile well test separator, which indicated a wellhead pressure of 430 psi using a 32/64 choke.

The well was drilled through the Waha formation, using CL-free drilling fluid, in cooperation with the Al-Jowfe Service Company.

The NOC reported that the well will be tied into the production station as soon as the test rig is removed from the site.

It reaffirmed that it is actively promoting development drilling and testing across the Libyan oil sector within its framework of ongoing efforts to increase and maintain production.