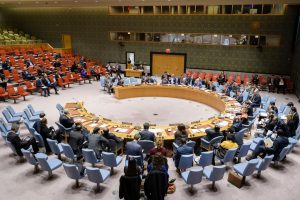 The UN Security Council voted yesterday to unanimously renew measures designed to implement the Libya arms embargo for another year. The resolution authorizes Member States with the power to inspect vessels on the high seas off Libya’s coast when reasonable grounds exist to believe they are violating the ban.

The UN Security Council also requested the Secretary-General to report within 11 months on the text’s implementation.

The UN Security Council reported that during a brief debate, Council members, underscored the need to keep the embargo in place and reiterated calls for an immediate ceasefire in Libya, emphasizing that there is no military solution to the conflict.

Stephen Hickey, representing the United Kingdom, the main sponsor of the text, expressed concern over reports of weapons entering Libya and reminded all Member States of their obligations under resolution 1970 (2011).  He called on all parties to respect the arms embargo and desist from any actions that might hinder a United Nations-facilitated dialogue.  Emphasizing that there is no military solution to Libya’s challenges, he called for an immediate ceasefire, humanitarian access and a return to talks, adding that a United Nations-led political dialogue is the only way to achieve the stability and security that Libyans deserve.

Anne Gueguen, representing France, said her country is extremely concerned about the situation in Libya, especially with regard to the ongoing fighting and the potential effects for countries in the region.  She reiterated France’s call for an immediate ceasefire with no preconditions, with the parties committing to a dialogue facilitated by the Special Representative of the Secretary-General.  Respect for the arms embargo is more necessary than ever, she said, adding that, despite a temporary suspension, the European Union’s Operation Sophia remains active.

The representative of Germany, Juergen Schulz, noted important progress made through Operation Sophia.  The arms embargo is more important than ever, he said, stressing that the supply of weapons fuels an erroneous conception that military force can solve the crisis.  Expressing support for the Special Representative of the Secretary‑General, he stressed that it is time to redouble efforts towards a political settlement.

Belgium’s representative, Marc P. De Buytswerve, voicing support for extending the embargo, denounced its systematic violation.  Describing the embargo as indispensable, he said there is no military solution to the situation in Libya.  Agreeing with the representative of the United Kingdom, he called for an immediate ceasefire and a return to dialogue under the aegis of the United Nations and expressed the hope that the Council will state its position as soon as possible.

Jerry M. Matjila, South Africa’s representative, said it has been two months since the crisis in Libya started with none of the parties respecting the Council’s call for a ceasefire.  Only through a national dialogue process can the conflict be resolved, he said, strongly urging Member States to fully implement the embargo measures.  He reiterated that for his country, sanctions are a tool to advance a political process and must not affect humanitarian assistance.

Côte d’Ivoire’s representative, Kacou H.L. Adom, welcomed the unanimous adoption of the resolution, which comes at a time when security and human rights conditions in Libya are deteriorating.  The embargo provides vital assistance to efforts to bring about a ceasefire, which is a precondition for relaunching negotiations and the political process.  Expressing concern about that Operation Sophia’s naval assets have been weakened, he called for participating countries to make equipment available to the military operation.

Dian T. Djani, representing Indonesia, called for efforts to restart political mediation as the situation can be solved only through a political process.  Civilians in Tripoli must be protected.  While expressing concern about the safety of United Nations personnel, he urged all parties to respect humanitarian law and human rights law.  His delegation voted in favour of the text to show that the Council is unified in its efforts to silence the guns in Libya, expressed hope that today’s action will lead to a political process.

It will be recalled that both sides of the Tripoli war which commenced on 4 April when Khalifa Hafter and his allied forces launched an attack on Tripoli, have been receiving arms from their international allies in barefaced defiance of the UN arms embargo.

Analysts have criticised the international community for its hypocrisy with regards to the Libya arms embargo in failing to take real action to stop regional powers accused of supplying arms such as Egypt, UAE, Jordan, Turkey and Qatar.

The failure of the international community to stem the illegal supply of weapons to Libya is seen as a factor that is extending the fighting in the country and is seen as flying in the face of their call for an immediate ceasefire.