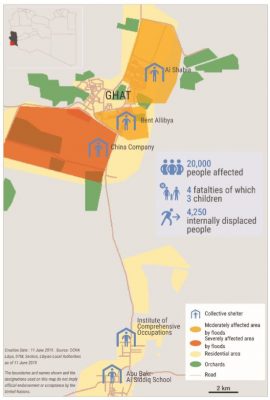 The floods in Ghat have stabilized but the risk of disease outbreak is high reports the UN’s OCHA (Photo: OCHA).

The situation in the municipality of Ghat has stabilized since 7 June as the rains have stopped and flood water levels have dropped in most areas, the latest UN Tripoli Office for the Coordination of Humanitarian Affairs (OCHA) report released yesterday has confirmed.

In the worst affected areas of the municipality houses and public infrastructure, including farmlands, roads and schools were severely damaged with the elementary and middle school official exams are still on-hold. The floods resulted in 34 casualties, including four fatalities and 30 minor injuries. With reports of missing persons presumed trapped by the floods, the OCHA report says.

Due to water infrastructure damage and contamination there is a high risk of disease outbreak with an increased number of acute watery diarrhoea cases, mainly in children, reported. Health and WASH sectors are working together to minimize the risk and respond, OCHA says.

The telecommunication network has been fixed and electricity is operational in some areas of the municipality. Solid waste management, especially of dead animals, and disinfection of boreholes are expected to be top priority needs.

At least 4,250 people (850 families) are confirmed to have been displaced. According to the Ghat Emergency Committee and humanitarian partners on the ground, five collective shelters are hosting about 1,200 internally displaced persons; three schools in Ghat city and two schools in Alberket town, 7 km south of Ghat city; while others joined friends and relatives in safer areas.

Immediate needs were provided by the Libyan Red Crescent, national and local authorities, and sectors’ partners operational in the region. After the initial first days and with the immediate shelter and food needs covered, needs are shifting from household lifesaving to community level basic service provision. Needs pertaining to refugees and migrants still need to be identified, the OCHA report said.