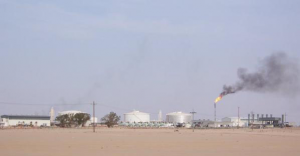 A fire at Sarir oil field led to a production loss of 30,000 bpd the NOC reported (Photo: NOC).

Libya’s National Oil Corporation (NOC) reported yesterday that a fire broke out early on 9 June at compound number one at the Sarir oilfield due to high temperature experienced in an electric generator. The incident has resulted in a production loss of approximately 30,000 barrels per day (bpd).

The blaze started at the field’s power station, cutting off electricity supply to compound number one. An internal investigation is underway to determine the cause of the temperature rise and an estimated restart date post repair works, the NOC said.

The NOC said that AGOCO was able yesterday to repair and restart compound number two at the site, which had been inoperable since May due to a technical issue. Restarting compound two will help production gradually return and add up to 60,000 bpd to site’s output, NOC revealed.

The NOC said that current production at Sarir is around 155,000 bpd.