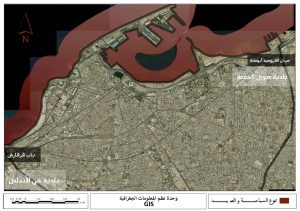 With temperatures rising and many students already on summer holidays, hastened by the Tripoli fighting, on Sunday Tripoli Central Municipality/Council declared all – about 14 kms – of the central beaches of Tripoli unfit for swimming or fishing.

The Council said that it had commissioned its environmental sanitation team and its municipal engineers to put up warning signs along these beaches. 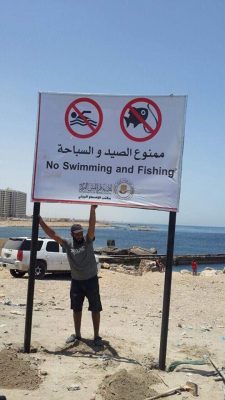 The Council said that it had reached the decision based on the results of analyses of sea water samples taken from different points along Tripoli’s central stretch of beach. Results from these samples showed the existence of indicators of contamination of wastewater in all samples analysed in both public and private laboratories.

The announcement will come as no surprise to most Tripolitanians as its polluted beaches have been a well-known fact for decades. It is well known that there are numerous sewage pipes emptying their effluent into the sea along a long stretch of Tripoli’s coastline.

The Qaddafi regime had for decades threatened to divert this for processing but failed to implement these plans.

Indeed, if the adjoining municipalities in Hay Andulous and Sug Juma test their sea water, more stretches of beach will probably turn out to be polluted. Most Libyans know that it is better to swim beyond heavy urban areas of central Tajura and beyond Janzour to ensure clean sea water.