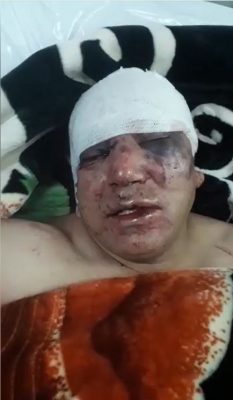 The Tripoli Ministry of Health today strongly deplored the vicious attack on Dr Abubaker al-Ajnif at his clinic yesterday. The attack left the cardiologist badly bruised with his face disfigured.

The Health Ministry called upon the security authorities to take the necessary measures to put an end to this phenomenon, which it said is offensive to doctors and medical personnel, and which is contrary to the values and morals of the Libyan people.

It stressed that the aggressor should receive a deterrent punishment and that the Ministry was following this matter with keen interest.

The Ministry of Health stressed that it does not tolerate any attack on its cadres, noting that it addressed the competent security authorities about the latest attack in order to take legal steps.”

They called on official and responsible authorities to investigate the incident and intensify their efforts to apprehend those who committed the crime, as well as to putting an end to the atrocities that occur against doctors within and outside health institutions.

They warned that they were prepared to address this phenomenon among their priorities, with all the necessary legal and escalatory tools to safeguard the rights of assaulted medical personnel.

It will be recalled that cardiologist Ajnif was viciously attacked by robbers who surprised him at his Tripoli clinic yesterday. This specific attack on a medic touched a chord with the Libyan public partly due to the damage to his face and due to the emotional video, the cardiologist posted on social media from his bed in his bloodied, bandaged and smashed face.

‘‘After we had just finished saving the lives of three heart patients (in operations) in another clinic, as I was entering my clinic in Hay Al-Andulous, I found criminals inside it’’, he explained in a tired and pained voice.

‘‘I was robbed, beaten, threatened with death, robbed of my hard-earnt savings by two people. I was kicked, tied up and held captive in a room’’.

The next sentence touched many Libyans as it is an issue debated regularly since the 2011 revolution and in view of the destructive Tripoli war. ‘‘Unfortunately, there is no homeland and there is no patriotism in Libya’’, the cardiologist said emotionally.

The doctor added that is it no wonder that Libyan doctors abroad refuse to return to work in Libya after having been sponsored by the state with a scholarship. This is another ongoing debate in Libya as the state has spent, and continues to spend, hundreds of millions in hard currency, on medical scholarships – yet a large number of graduate doctors refuse to return.

Meanwhile, the Libyan health system is in a state of collapse relying on foreign nurses while Libyans sell much of the assets they own to buy inflated black-market currency to pay for treatment abroad.

The cardiologist stressed that he had worked and had opportunities all over the world – yet, patriotically, he chose to return to work in his homeland.

‘‘I left the outside world. Britain, Jamaica, the Cayman Islands. This is the second time the homeland has let me down. The first time my clinic was broken. This time I (my body) have been broken. It is clear that Libya has no relation to patriotism’’, he concluded.