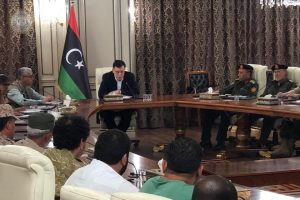 Serraj meets military commanders aligned to him in the Tripoli fighting against Hafter (Photo: PC/GNA).

In his role as Commander-in-Chief of the (western based Libyan Army) forces defending Tripoli in the fighting against the pro Khalifa Hafter forces, Faiez Serraj met with all his aligned commanders in Tripoli on Saturday to review the latest state in the fighting.

These included the Chief of General Staff of the Libyan army, the Interior Minister, the commanders of the military areas and the leaders of the different fighting fronts.

During the meeting, a ‘‘new phase of the plan to confront Hafter’s forces was adopted and its requirements were identified’’.

Serraj ordered ‘‘the reinforcement’’ of the combat units aligned to his government with ‘‘all the requirements of the operations’’.

The addressed the coordination programmes and mechanisms between the military operations room of Tripoli and the various security and military sectors, and the review of security measures and plans to ensure the safety of citizens and vital installations.

The meeting came a day before Serraj launched his new political initiative to bring an end to the fighting. In retrospect, it was probably an attempt to launch his initiative from a position of strength and probably with the agreement of his military commanders. It was probably meant to send a signal to the Hafter forces that he was backing the fighting fully, in the hope of disheartening the Hafter forces.