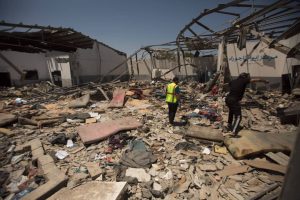 Over 40 migrants were reported dead at the Tajura migrant centre in eastern Tripoli after it was hit by an airstrike early this morning attributed to the Khalifa Hafter forces (Photo: UNHCR).

The internationally recognized Libyan Presidency Council and Government of National Accord led by Faiez Serraj as well as the UN today condemned in the strongest possible terms the Tripoli airstrike that led to the death of at least 44 and injury of 130 migrants.

The strike has been attributed by the Serraj government to the Libyan National Army (LNA) Air Force led by Khalifa Hafter who, it will be recalled, had launched an attack on Tripoli on 4 April.

Sources in Tripoli said they heard the loud sound of explosions just after 5 am which were followed by a series of other explosions.

The deaths and injuries occurred in the Tajura migrant centre east of Tripoli.

Unsurprisingly, there are conflicting narratives from the two conflicting sides, with the Hafter side saying they had targeted the militia base near the migrant centre and that the exploding ammunition caused the deaths of the migrants.

The Serraj administration accuse the Hafter side of deliberately targeting the migrant centre.

In its condemnation, the Serraj government described the airstrike as “cowardly” a “mass murder” and a “war crime” which it said added to Hafter’s list of crimes against humanity.

It insisted the airstrike was deliberate and precise and not accidental.

The Serraj administration called on UNSMIL to condemn this “barbaric act” immediately and to send a fact-finding committee to the site to investigate.

It also called on the international community to take a clear and decisive position on these transgressions and to bring an end to this aggression immediately.

It added that this airstrike confirms the enemy’s (Hafter’s) defeat and bankruptcy after suffering huge recent losses (in Gharian).

The United Nations Support Mission in Libya (UNSMIL), also strongly condemned the attack on the Tajura compound in which migrants were detained.

It confirmed that it led to at least 44 deaths and more than 130 severe injuries. This is the second time this facility, hosting about 600 migrants, has been attacked, it added.

UNSMIL said its head and Special Representative of the Secretary-General, Ghassan Salamé, condemns in the strongest terms this cowardly act.

“This attack clearly could constitute a war crime, as it killed by surprise innocent people whose dire conditions forced them to be in that shelter” Salamé said.

“The absurdity of this ongoing war today has led this odious bloody carnage to its most hideous and most tragic consequences,” the SRSG said, calling upon the international community to denounce this crime and apply appropriate penalties on those who ordered, carried out and provided arms for this operation in a flagrant violation to the international humanitarian law and the simplest humanitarian norms and values.”

UNSMIL said that it has been monitoring, with utmost concern, reports related to allegations of extrajudicial killing in various places, including the recent incidents in Gharian, as well as other similar incidents that took place in the outskirts of Tripoli.

UNSMIL reiterated its commitment to monitoring and documenting all gross violations of the International Humanitarian Law and International Human Rights Law and reporting the same to the relevant UN bodies and international community in order to prosecute the perpetrators.

It said that it has dispatched committees to various places that have witnessed such violations to conduct investigations on the ground.

UNSMIL and affiliate UN agencies also call for immediate cessation of all horrendous violations and repeated attacks on civilians and civilian infrastructure, particularly health and medical facilities, and reminds all parties of their obligations under the international laws in force.