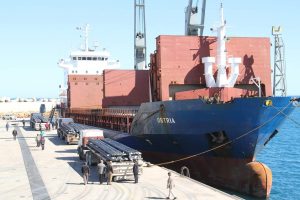 The Misrata based LISCO announced that it had exported a shipment of rebar to Algeria estimated at 7,000 tons.

It added that this was the fourth shipment in a series of exports transacted by the company during the last short period.

LISCO revealed that the previous shipments reached more than 20,000 tons, and that other export deals were in the pipeline.

It said that its next export shipment is expected to be to Lebanon.

It will be recalled that in March LISCO had announced exports to Egypt and Algeria.

LISCO had resumed exports after receiving permission from the Tripoli government to export its products as a result of surplus production to the needs of the local market.