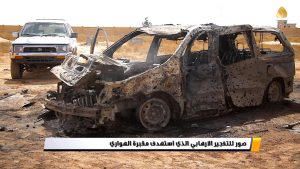 Car bombs at a Benghazi funeral has led to 4 deaths and 33 injuries (Al-Hadath TV).

At least three car explosions in Benghazi’s Al-Hawari cemetery during a funeral today killed 4 and injured 33. This included civilians attending the burial ceremony.

The funeral was of former Saiqa Special Forces Commander, Khalifa Al-Mesmari, and was attended by a high concentration of military personnel.

Mesmari had died in Jordan two days ago after having suffered a chronic illness.

Some reports suggested that the explosion was targeting the Libyan National Army’s (LNA) Wanis Boukhamada, the current Commander of the Saiqa Special Forces. The LNA has said Boukhamada was unhurt.

LNA Commander, Khalifa Hafer, has ordered an immediate investigation by all security forces in the “terrorist bombings”.