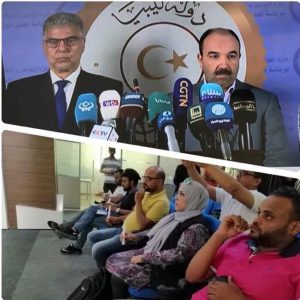 Libyan media hold up candles to GECOL management during a press conference mocking them for their ineptitude (Photo: Social media).

Libya’s state electricity generating company, the General Electricity Company of Libya (GECOL), had to endure a heated press conference from the generally docile Libyan media over its huge failure to provide adequate electricity supply despite admitting to receiving funding.

Members of the Libyan media held up candles to GECOL management during the press conference on Sunday.

The top management of GECOL admitted that there has been a problem with meeting power supply for years.

It admitted that it does not currently have the generation capacity to meet peak winter and summer demand. It confirmed that generation is at 5,000 MW with demand at 7,000 MW.

It proposed that if consumers reduced consumption by a third, there would be no power cuts within an hour.

Ultimately, GECOL said that the lack of security in Libya is the root cause of the chronic power cuts.

It confirmed a long list of contracts in place totalling 5,000 MW, that if completed would wipe out the power cuts.

These projects have been stalled since 2011 despite GECOL trying on various occasions to get the contracting companies to return.

The last example of this, GECOL pointed out, was the kidnapping of the Ubari plant foreign employees.

GECOL pointed to the example of Algeria and Egypt who had both a power generation deficit which they resolved in three years and now have generation surpluses.

Completing these stalled contracts is the solution to Libya’s power shortage, GECOL stressed. However, foreign contractors will not return with Libya’s current security situation as their precondition to returning is the guarantee of security for their employees.

GECOL even admitted that some foreign companies sent their own security plans as a precondition to returning to Libya. GECOL said they had approved these plans.

GECOL said they were still trying to convince the foreign contractors to return and were hopefully some will return “soon”.

Meanwhile, the fed up Libyan public is no longer interested in the causes of the power cuts. They are unhappy with the billions allocated to GECOL without any apparent results.

Some areas of Tripoli have had no power for three days. It is having a demoralizing effect on their lives and their morale.

One such Tripolitanian told Libya Herald “We have to shop on a daily basis in small amounts. Only what we consume daily, which is time consuming and inconvenient. Any thing that perishes has to he bought and used on the same day without a fridge”.

“The contents of the fridge and freezer were thrown away at the beginning of summer with the first long power cut.”

“I no longer have a fridge. Its been empty since the start of the lengthy electricity cuts. A long time ago I washed it, dried it and I am now using it as a new cupboard” she added sarcastically.

The power cuts affect water supply as well as many Libyans relay on electricity to pump their water – when there is water from the mains.

The electricity crisis has been compounded for many with an on-off water cut caused by attacks on the Man-made River Project.