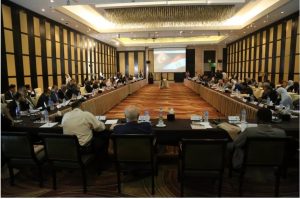 Members of the Tobruk-based House of Representatives (HoR), seen as being politically aligned with Khalifa Hafter and his Libyan National Army (LNA), participated in a conference in Cairo on Sunday and came out with a five-point plan to end Libya’s crisis.

The HoR reported that more than 70 members attended the conference which proposed the following five-point plan:

1-That the unity and integrity of Libya’s territory is a red line.

2-Any solution to the current Libyan crisis must be through the HoR, Libya’s only legitimate and elected body.

3-The Cairo conference underlined Libya’s civilian state status, the democratic process, the peaceful transfer of power and the ongoing validity of the 2011 Transitional Constitutional Declaration.

4-The meeting called on all HoR members that did not attend to meet for further dialogue.

5-At the forthcoming meeting of all HoR members, a new “unity government” and a new political roadmap with a clear timeline would be discussed.

At the time of publication there was no response from the Tripoli Faiez Serraj government.

However, many regard the conference as a failed attempt by Egypt to achieve consensus between Tripoli and Khalifa Hafter – and to ensure the continued central political role for Hafter.

It will be recalled that Hafter launched an attack on Tripoli on 4 April in order to “liberate” it from “terrorists”, “Islamists” and “militias”.

The conference is deemed a failure because it was intended to include members from both sides of Libya’s polarized political divide in a “consultative meeting”.

However, the Tripoli breakaway bloc of HoR members refused an invitation earlier this month to attend the Cairo meeting.

The invitation had been communicated to the Tripoli bloc through Egypt’s ambassador to Libya, Tripoli HoR members had reported.

The Tripoli HoR bloc said they had refused the Egyptian invitation for three reasons.

First, the agenda and aim of the Cairo meeting were thought to be unclear.

Secondly, most Tripoli HoR members felt Egypt was partisan and could not be a neutral facilitator.

Finally, some HoR members did not like the political implication of the Egyptian ambassador contacting them directly. They insisted that Egypt recognizes and respects Libya’s internationally-recognized executive – the Faiez Serraj-led Presidency Council and Government of National Accord.

They wanted the invitation to be transmitted to them through Libya’s Tripoli Foreign Ministry.

It will be recalled that Egypt is the main backer of Libya’s eastern administration: the Abdulla Thinni Interim Government, the HoR and the Hafter-led Libyan National Army (LNA).

Together with the UAE and Saudi Arabia they are commonly perceived as the backers of Hafter’s war on Tripoli.

It will also be recalled that, Ageela Saleh, the head of the Tobruk HoR, had rejected the June peace initiative of Faiez Serraj.

Saleh had said that Serraj “has nothing to offer” and that he is a “hostage to Tripoli’s armed militias”.

It must also be noted that while the HoR in their Cairo meeting statement referred to the 2011 Transitional Constitutional Declaration, it made absolutely no reference to the Skhirate Libyan Political Agreement of 2015 – which is still recognized by UNSMIL as the political roadmap and political process.