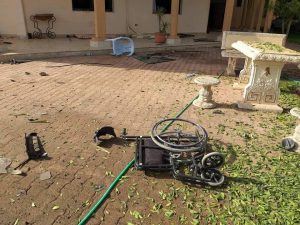 The Tripoli Health Ministry, aligned to the internationally recognized Faiez Serraj-led Presidency Council and Government of National Accord, strongly condemned what it called the “direct and immoral targeting of the field hospital” in the Swani area west of Tripoli yesterday morning.

The Health Ministry claimed the Swani hospital was hit by an air strike which injured three ambulance drivers and a paramedic, and caused destruction to the hospital and its medical supplies and equipment.

“This is the second targeting of the Swani Field Hospital, even though the hospital is far from the fighting front lines,” Fawzi Onis, head of Crisis and Emergency at the Ministry was quoted as saying.

“This is not new for the aggressor forces (official Tripoli speak for Khalifa Hafter’s forces), and we call on humanitarian organizations and the World Health Organization to condemn these acts and register them as war crimes against humanity in the UN Security Council,” he continued.

It will be recalled that the same Swani Field Hosputal was reported as being hit by an airstrike attributed to the pro Hafter forces on 6 June.