Water supply slow to arrive in Tripoli due to protesting militias 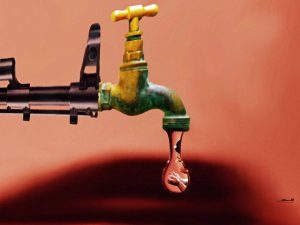 Water will be late arriving to Tripoli and the Western region due to militia protest at long power cuts to the south (Photo: Social Media).

In an “important clarification” Libya’s Water Resources Authority said today that water will be slow in arriving to Tripoli and the whole Western region.

The announcement comes as the public express their extreme frustration as some areas in Tripoli have had no water for four days.

The announcement comes as a deep disappointment after it was first announced that water from the Eastern branch of the Man-Made River (MMR) had began to be pumped.

However, the MMR today revealed that only one pump out of five pumps in the Eastern waterwells are functioning due to the refusal of some of the “armed group” refusing to allow all the pumps to be operated.

The Water Authority said that if the situation continues as it is with only one pump, the arrival of water to the city of Tripoli will be delayed by four days or more.

It will be recalled that the pumping of water to Tripoli and the Western region only resumed on Sunday after being cut off last Friday.

The water had been cut off after the same armed militias, presumed from the south of Libya, entered the power station supplying the MMR and forced workers to divert power to the south of Libya – in protest at ridiculously long power cuts in the south.

The incident shows how state infrastructure supplying  water, electricity and oil continue pist the 2011 revolution to be used as means of protest for both genuine and political grievances.