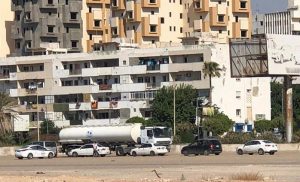 Petrol is being distributed by trucks in Tripoli to overcome queues at petrol stations (Photo: Social media).

The move was forced upon the company as a result of the long queues at petrol stations in the capital.

The move comes dispite the fact that Brega assures that it has adequate fuel supplies especially with the arrival of the fuel tanker at Tripoli port carrying 34 millions of litres of petrol.

This is a result of a Qaddafi-era policy to reduce the number of petrol stations in Tripoli for “security reasons”.

The fighting on the outskirts of Tripoli have also contributed to overcrowding in Tripoli by tens of thousands of internally displaced moving to the capital.

All this with the background of ongoing fighting between the pro Khalifa Hafter forces and the forces defending Tripoli since 4 April.