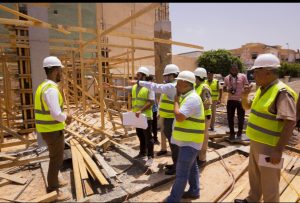 The UNDP’s SFL reaches over 2 million people completing 119 of 343 projects including hospitals, schools, ambulances,  and water pumps across Libya (UNDP).

It reported that he projects aim at supporting municipalities to provide basic services for people throughout Greater Tripoli.

In addition to the work completed on the 30 schools, the SFL is equipping 65 health centres and 42 more educational facilities.

Other projects on the list include improvement of solid waste management, the transportation sector, and water and sanitation services.

At Tripoli Central Hospital, which is being rehabilitated by the Facility, Mr Noto stated: “SFL support to the health sector in Tripoli and in cities West, East and South of the country makes a significant contribution to improve the lives of people around Libya. I have witnessed how the work done by UNDP through SFL – with contributions from 13 international partners and the Government of Libya – responds to the priorities identified for national and local stakeholders and set the basis for stabilization of communities.”

The Director of Tripoli Central Hospital, Mr Bahloul Othman, said: “UNDP, through the Stabilization Facility for Libya, is rehabilitating the ‘Nose, Laryngeal and Laryngology’ department, which consists on four treatment rooms and a surgical room. All the reform is being carried out according to the plan, hence I would like to thank SFL and UNDP for the excellent engineers that are undertaking this great work.”

“In my name and on behalf of the people of the Abu Salim Municipality, I would like to thank Mr Gerardo for his visit and the support that UNDP gives throught SFL to stabilize the region.” He added: “This support came in the right time, both in the education and health sector, as we are in dire need of help due to the consequences of the conflict such as people displacement.”

The report said that so far, the Stabilization Facility for Libya has reached over 2 million people, completing a total of 119 of its ongoing 343 service rehabilitation projects, repairing facilities like hospitals and schools, and providing essential equipment, such as ambulances and water pumps across Libya.