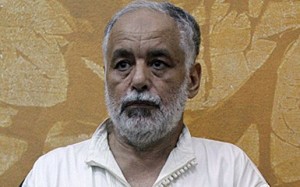 The Tripoli Ministry of Justice, aligned to the internationally recognized Libyan Presidency Council and Government of National Accord led by Faiez Serraj, announced today that it is releasing Baghdadi Mahmoudi, Qaddafi’s last Prime Minister.

The Ministry of Justice said it had made this decision based on existing applicable laws which permit the Minister of Justice to release prisoners on medical grounds.

Based on this, the statement said, prisoner Baghdadi Ali Mahmoudi currently held at Ain Zara prison on the outskirts of Tripoli, held on case number 630/2012, is to be released.

The statement said that Mahmoudi’s release was based on the recommendations of the specialist medical committee which advised he receive specialist medical treatment at advanced medical centres outside the prison institutions after exhausting means of treating him internally.

However, the Ministry of Justice statement assured that this was a humanitarian act of mercy which is at the heart of the principles of human rights, but without in anyway reflecting in any way on any of the charges made against the accused.