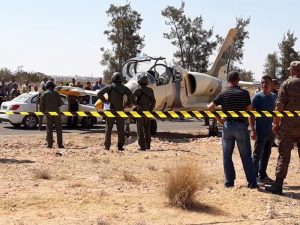 A fighter plane belonging to the Khalifa-Hafter-led Libyan National Army (LNA) was forced to land in southern Tunisia due to a technical fault (Photo: Social media).

A fighter plane belonging to the Khalifa Hafter-led Libyan National Army (LNA) was forced to land in Tunisia this morning.

The L-39 type plane took off from the Brak Al-Shati base, just north of Sebha, currently controlled by the LNA-aligned forces.

There has been much speculation regarding the reasons for the fighter plane’s landing in Tunisia.

Indeed, initially it was reported that the plane belonged to the Tripoli forces and had taken off from Misrata and that its pilot had abandoned his ordered bombing strike and had defected.

Equally, it is now reported that the LNA-aligned pilot had similarly defected by landing in Tunisia.

However, Tunisian media is reporting official Tunisian sources as saying that the fighter craft suffered a technical malfunction in the air navigation systems, and may have run out of fuel, which caused the pilot, reported as Colonel Al-Sagheer Al-Ghiriani, to land in Tunisia.

The pilot is reported to be in good health and his craft, judging from widely circulating media photographs, looks undamaged.

The incident unwittingly draws Tunisia into the Libyan political and military conflict as it now has to make a decision as to what to do with both the pilot and his fighter plane.

‏‎At the time of publication there had been no official comment on the incident from the LNA.