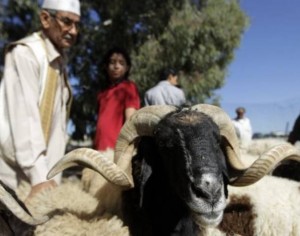 A ram for the Eid sacrifice (LH archives).

Many Libyans are abandoning the traditional purchase of the Eid Al-Adha sacrificial ram due to bank cash withdrawal limits and rising prices, LANA, the eastern-based official state news agency, reported on Friday.

The Eid Al-Adha holidays will start on 11 August this year.

The news comes on the back of banks in the east announcing that cash withdrawal limits will be a maximum of LD 1,000.

This contrasts starkly with the fact that prices of appropriate home-bred sacrificial rams are ranging from LD 1,000 to LD 1,800 – exceeding the value of the bank cash withdrawals.

Moreover, the three-day feast involves the purchase of other luxuries such as traditional sweets and cakes, drinks etc, to host visiting relatives and guests.

The bill quite quickly adds up to well beyond the set bank cash withdrawal limits for families who rely on set salaries. This is especially the case for state employees who have to wait two months or longer to receive their salary.

Many would have already racked up everyday running debts over the period which they would need to pay.

In view of these perennial cash withdrawal limits and high ram prices, the report says many Libyans are abandoning the purchase of a sacrifices all together.

The report highlights the religious fact that the purchase of a ram for sacrifice is not mandatory but rather desirable for those who can afford it.

The report says that some Libyans in the east believe that buying sacrifice rams at these high prices only gives some unscrupulous traders the opportunity to exploit buyers.

This has led some to call for a boycott of the Eid sacrifice to send a message to livestock traders.

On the other hand, livestock traders complained of the cost of livestock feed, which has to be imported using hard currency, and blame lack of supply and the general high cost of living in Libya.

It must also be pointed out that whilst most Libyans prefer locally bred rams, which are the most expensive, the Libyan state has arranged for the import of foreign-bred rams which are traded at a lower price.