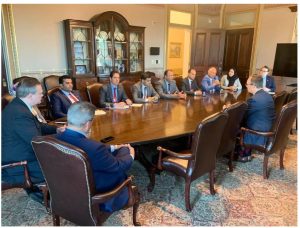 The Tobruk-based HoR delegation reported that they met with senior members of the U.S. Congress and Whitehouse in DC last week to explain the LNA’s attack on Tripoli (Photo: Tobruk HoR).

A high-level delegation of the Tobruk-based Libyan House of Representatives (HoR) visited to the U.S. capital Washington last week, the Tobruk HoR reported on Thursday.

The HoR report that its delegation visited the U.S. Congress and Senate and “met a number of its members”, as well as meeting with “a number of officials of the State Department and Whitehouse ” in order to “clarify the picture of what is happening in Libya to the American administration and the legitimacy of the war on terrorism, extremism and illegal armed militias carried out by our (LNA) armed forces and provide a number of files and documents about these extremist groups”.

The HoR also reported that its delegation will discuss ways in which the “U.S. provides support to Libya in the fight against terrorism, extremism and bilateral relations between the two countries on the security, political and economic levels”.

The HoR reported that its delegation assured the U S. of the “legitimacy” of the General Command of the Armed Forces (the Khalifa Hafter-led Libyan National Army – LNA) emanating from the legitimate House of Representatives elected by the Libyan people.

The delegation also explained the reasons for the operations of its armed forces in the capital Tripoli as a result of the proliferation of armed militias and their control over the capabilities and wealth of the Libyan people and the tampering with them and corruption in the Tripoli Central Bank of Libya.

The Tobruk HoR also reported that they “delivered a message” to senior U S. State Department and Department of Defence officials “about Turkish and Qatari intervention in Libya and their support for armed militias with weapons, armored vehicles and aircraft, against the LNA”.

The Tobruk HoR said that during this visit “channels of communication were opened” between it and the U.S. Congress and the American administration “for communication and exchange of information and joint cooperation between the two countries”.

It added that the Faiez Serraj government “is illegal and does not have political confidence (legitimacy) and Libya will witness in the coming period the formation of a government of national unity which will have the confidence of the Tobruk HoR”.

This new government will work to solve the problems of the Libyan people, achieve national reconciliation and reunite Libyans, the HoR reported.

The Washington DC visit by the Tobruk HoR coincides with a visit by the Tripoli-based HoR to Moscow on Wednesday where they reported that they met the Russian Foreign Ministry and members of the Duma.

However, the Libyan Political Agreement (LPA), signed in the Moroccan city of Skhirat in December 2015, and the operative and internationally-recognized Libyan political roadmap, prescribes that the Libyan government can only be changed through consensus by the Tobruk HoR and the Tripoli-based High State Council (HSC).

The HSC generally hold opposing views to the Tobruk-based HoR.

Moreover, after the Khalifa Hafter-led Libyan National Army (LNA) launched a military attack on Tripoli on 4 April, a group of mainly western-based HoR members in opposition to the war on Tripoli have broken off and now meet separately in Tripoli.