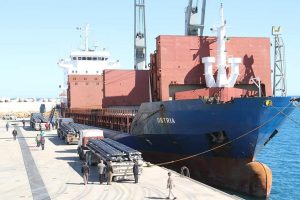 LISCO has made another steel export shipment this year, this time to Lebanon (Photo: LISCO).

Libya’s Misrata-based state-owned Iron and Steel Company (LISCO) announced yesterday that it has exported 5,000 tons of reinforced steel of different sizes to Lebanon.

It said that it was in the process of making other exports both to other Arab countries as well as to other countries.

It will be recalled that in March this year, LISCO had announced that it had made its first export shipments to Egypt and Algeria.

The shipments were of 10,000 tons of rebar hot rolled steel. It said at the time that other potential exports were being negotiated with a number of other countries.

Indeed, in July it had announced another export shipment to Algeria.

It will be recalled that LISCO had increased its production capacity last year and has been cleared to export 150,000 tons by the Tripoli Ministry of Economy.