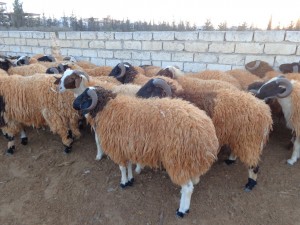 The Tripoli government has said that it has imported 317,107 rams and cows in time for the Eid of Sacrifice next Sunday (Photo: From archives by Sami Zaptia).

The Faiez Serraj-led Libyan Presidency Council and Government of National Accord, has announced that it has imported a total of 312,878 sheep and 4,229 cows totalling 317, 107 animals up to 10 August.

Contrary to our earlier article stating that these figures only covered Western Libya and that Eastern Libya, under the nominal control of the Interim Government, had made its own import arrangements, the Serraj government has confirmed that these updated figures include the landings of livestock at Tripoli, Khoms, Misrata, Benghazi and Tobruk ports..

It will be recalled that the Tripoli Ministry of Economy had reported last year that Libya’s Farmers Union estimated that local production will only produce about 800,000 animals which would only meet about 50 percent of needs, and therefore, it expects to import about another 800,000 heads at a minimum weight of 45 kg each – at an estimated total cost of Euro 130 million.

The animals will be made available for the Eid Al-Adha (sacrifice) feast holiday beginning Sunday. In Islam, the sacrifice of an animal is discretionary for those who can afford it. As is in the Old Testament, the sacrifice of a ram is to commemorate the prophet Abraham (Ibrahim) offering his son Isaac as a sacrifice, only for god to substitute at the last minute Isaac with a ram instead.

There has been public disquiet in Libya this year – which seems to happen every year – at the prices of sacrificial rams – which have to be of a certain age. The general high cost of living, including the black-market rate of hard currency, the late payment of state-sector salaries, as well as the bank cash withdrawal limits of about LD 1,000, have made it near impossible for many families to purchase a ram this year.

Indeed, many Libyans are calling for a boycott by buyers against what they see as exploitative animal stock traders. With appropriate home-bred sacrificial rams are ranging in price from LD 1,000 to LD 1,800 – this far exceeds the bank cash withdrawal limit of LD 1,000.

A local bank, Sahary bank, has gone so far as to offer an interest free loan payable over a year specifically for the purchase of the Eid sacrificial ram. This is a first such service to be offered by the Libyan banking sector.

It must be pointed out that whilst most Libyans prefer locally bred rams, which are the most expensive, the Libyan state has arranged for the import of foreign-bred rams which are traded at a lower price ranging from 20-30 percent.