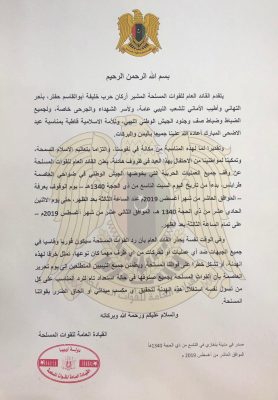 The Khalifa Hafter-led Libyan National Army has announced within the last hour that it has accepted Tripoli’s conditional truce over the four-day Eid Al-Adha feast of sacrifice period.

The LNA statement said that the truce was accepted out of respect to the occasion of the holy Islamic Eid Al-Adha feast of sacrifice in order that that Libyan citizens could enjoy a peaceful feast.

The truce will be on all military operations on the outskirts of the capital Tripoli from 3 pm (Libya time) today until 3 pm Monday 12 August.

The statement warned that the LNA would respond instantly and with force against any operations or movements of any kind on all fronts that are seen as a transgression of this truce or any attempts to exploit the truce to make any progress.

It will be recalled that the Faiez Serraj-led Presidency Council and Government of National Accord had announced late last night a four-point conditional truce.

In response, UNSMIL had announced its disappointment earlier today that the eastern Libyan side had not responded positively to the proposed truce.

The internationally-recognized Tripoli Presidency Council and Government of National Accord had said in its truce proposal of yesterday that it was agreeing to this ‘‘limited humanitarian truce’’ in response to humanitarian needs and the request by UNSMIL.

Tripoli’s first condition is that the truce must include all areas of fighting and all direct and indirect firing must cease and there must be no forward movement made from current positions on the ground.

Secondly, all flight activity and observation flights in all skies and from all air bases must be prohibited.

Thirdly, the truce must not be used as cover to move or mobilize troops.

And finally, UNSMIL must guarantee the implementation of the truce and monitor any transgressions of the truce.

It will be recalled that UNSMIL has called on numerous occasions over the last few weeks for a truce over the religious and holy Eid Al-Adha period.

It will also be recalled that it was the Khalifa Hafter-led LNA and aligned forces that launched an attack on Tripoli on 4 April this year ostensibly to ”liberate it from militias, Islamists and extremists”. The liberation was supposed to only take ”a few days”.

“The decision to stop the war cannot be postponed indefinitely. I therefore submit the following three-part immediate action out of the conflict:

First, I call for a truce to be declared for the Eid al-Adha, which will fall on or about August 10.  The truce should be accompanied by confidence-building measures between the parties to include the exchange of prisoners, release of those arbitrarily detained or abducted, and the exchange of mortal remains.

Second, and following the truce, I request a high-level meeting of concerned countries to: cement the cessation of hostilities, work together to enforce the strict implementation of the arms embargo to prevent the further flow of weapons to the Libyan theatre; and promote strict adherence to international humanitarian and human rights law by Libyan parties.

Third, the international meeting should be followed by a Libyan meeting of leading and influential personalities from all over the country to agree on comprehensive elements for the way forward. Such a consensus was on the verge of being built in the run-up to the National Conference in April. It is past time for Libyans to end this long season of mutual suspicion, fear and division.

This triple action will require consensus in this Council and amongst the Member States who exert influence on the ground.” Ghassan Salame to UNSC on 29 July.

Salame warns Hafter of consequences of escalation and foreign interference