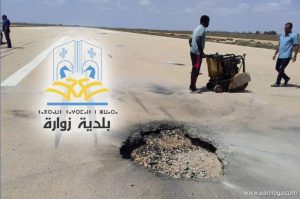 UNSMIL condemned on Saturday the airstrikes on Zuara civilian airport attributed to the air force of the Khalifa Hafter-led Libyan National Army (LNA).

After reviewing the airport’s facilities and all the adjacent buildings, the assessment mission was able to confirm that neither military assets nor military infrastructure were observed at Zuwara Airport. The Mission assesses that there is no indication of military use of Zuwara Airport, which is a civilian facility.

The Mission renews its condemnation of the attacks conducted by LNA forces against Zuwara airport, which caused serious damage to the airport’s infrastructure, including to the runway.  The Mission reiterates that attacks against civilians and civilian infrastructures constitute a grave violation of international humanitarian and human rights law.

UNSMIL will share the information and evidence gathered during today‘s visit to Zuwara Airport with the Security Council, the Panel of Experts, and other relevant international bodies, as is the case with assessments conducted by UNSMIL in the aftermath of other such incidents.”

The bombing of Zuara airport as well as the continued bombing of Tripoli’s Mitiga airport were also condemned by the Faiez Serraj Tripoli government.