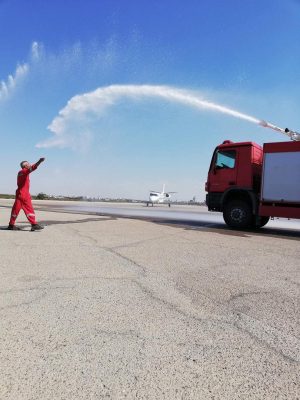 The Tripoli-based Ministry of Health, aligned to the Faiez Serraj-led Presidency Council and Government of National Accord, announced yesterday that one of its Cessna Citation 560XL Air Ambulances had returned at Mitiga airport yesterday from maintenance.

It had arrived from Malta carrying on board the head of the Flying Ambulance Service, captain Fathi Naji, and the flying ambulance team.

The U.S.-made Cessna returned to Libya after it went out of service in 2014 due to a halt in its regular maintenance and non-payment of its maintenance costs.

The Ministry of Health said that a third Flying Ambulance aircraft is expected to enter service in mid-September after completing its maintenance.

It will be recalled that in July this year the Libya’s Ambulance Service announced that it was launching its air ambulance service to the general public.

It said that patients could now book its service on a 24 hour basis by phone, email or through its online booking system.

It offered to provide services for transporting sick and injured passengers on board its fleet of aircraft equipped with modern medical equipment – for both trips within and outside Libya.

At the end of June this year, the Air Ambulance Service had announced that it had carried out more than 65 flights for 286 emergency cases since April alone.

The flights were to Rome, Tunisia and Turkey, transporting 222 war wounded and 64 patients, including children.

The Libyan Air Ambulance service had praised the Tripoli Ministry of Health for its support and solving various obstacles that had prevented it from operating.

These including paying debts owed to insurance companies, carrying out maintenance of its aircraft and training its staff –  in view of the fact that the Air Ambulance service had experienced a delay in receiving its alloted state budget.

It will be recalled that the Air Ambulance service had existed since the Qaddafi regime but in reality it had been too expensive for the average Libyan and was generally reserved for those with good connections with the Qaddafi regime.

It is yet to be seen if the average Libyan citizen can afford the new service in view of the economic hardship the country is going through and what prices and payment facilities the service will offer.

It will be recalled that the Serraj Tripoli government is conducting a major reform programme of the health sector, with the help of the EU, and the Air Ambulance Service progress is to be seen within that framework.