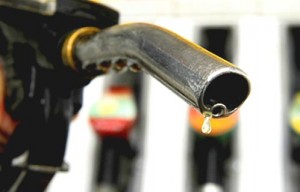 In light of the ongoing fuel shortage crisis, Tripoli’s Interior Minister has called for an end to Libya’s fuel distribution monopoly by its four main companies (file photo).

In a leaked internal letter dated 18 August to Faiez Serraj and the National Oil Corporation (NOC) – a copy of which was received by Libya Herald – Serraj’s Interior Minister, Fathi Bashagha, called for the monopoly enjoyed by Libya’s four main petrol station operators to be ended.

In the letter Bashagha noted that the four companies: Sharara, Al-Rahila, Oil Libya, and Express Way had failed to withdraw their daily allocated volumes of fuel from Brega Fuel Marketing Company in the midst of the ongoing fuel crisis which has seen ongoing long queues at petrol stations.

The letter also accused the fuel distribution companies of failing to adequately monitor their petrol stations and ensure their efficient operation.

The Interior Ministry was able to make this assessment because it had provided security at all petrol stations within the western region to avoid the breakout of any disorder, queue-jumping, black-marketeering and vilolence.

This failure to take up their allotted daily volumes of fuel had led to increased queues at petrol stations and the closure of others, due to alleged unavailability of fuel.

The letter speculated that the fuel distribution companies may have deliberately hindered fuel distribution in order to obtain permission to import fuel directly from abroad rather than buy it locally from NOC’s subsidiary Brega.

The four local fuel distribution companies are allowed from time to time to open hard currency letters of credit in order to import fuel when Brega is unable to supply their demand.

The opening of hard currency letters of credit and direct import of fuel is much more profitable for the four distribution companies as they can make a profit on the exchange process and by selling fuel locally at the subsidised rate.

When they purchase fuel locally, both the wholesale purchasing and retailing price are fixed to limited profit margins.

The Interior Ministry also speculated that the four fuel distribution companies may have been using the fuel crisis to exert pressure on the NOC into reopening some of their closed petrol stations being prosecuted for fuel black-marketeering and fuel smuggling abroad.

It will be recalled that the overwhelming majority of Libya’s petrol stations are now operated and under the brand of the four main distribution companies. The state-owned Brega Fuel Marketing Company now operates only a handful of petrol stations.

The letter said that since fuel is a daily necessity that affects everyday life as well as the security and stability of the country, it advised that petrol station operators are untied from their monopolistic relationship in order to be able purchase their fuel supplies directly from the NOC’s Brega Fuel Marketing Company in order to resolve Libya’s ongoing fuel crisis. 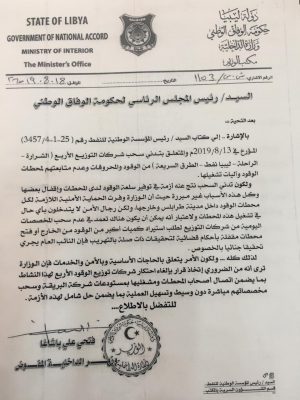 In a leaked letter to Libya Herald, Tripoli’s Interior Minister has called for an end to the fuel distribution monopoly by its main four distribution companies. He also accuses them of helping create the fuel shortage crisis.